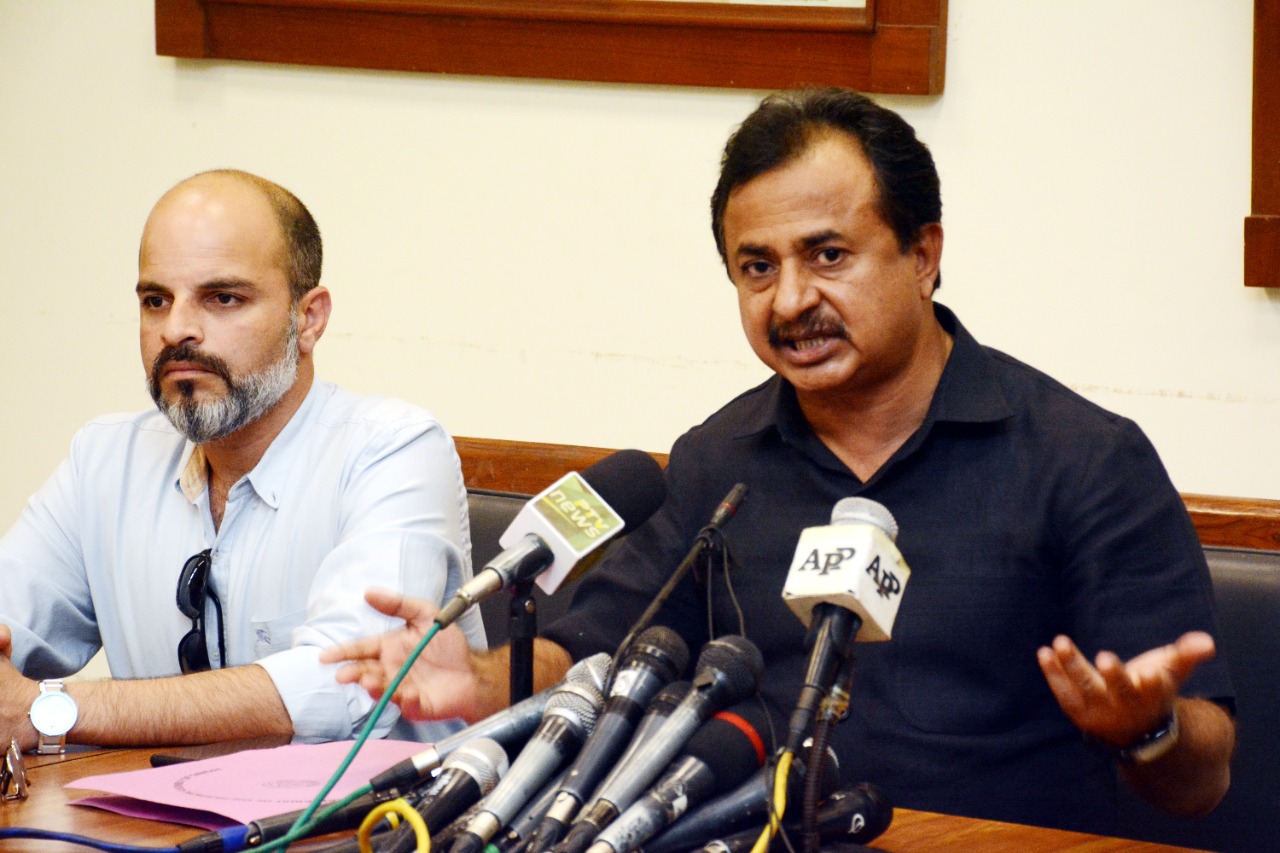 Mr. Haleem Adil Sheikh, the Opposition Leader in Sindh Assembly says that in case of more downpours, there would be urban flooding in Karachi due to the poor and collapsed drainage system in most parts of the city.

Mr. Sheikh, who is also central vice president of PTI, speaking at the news conference in Sindh Assembly on Tuesday showed his concerns and serious apprehensions over the poor drainage system of the city and said that Chief Minister Sindh, Syed Murad Ali Shah would be responsible for any damage in case of more monsoon downpours in coming days and weeks.

He alleged that the ‘absconding’ chief minister had no interest to even do something to and construct and cleanse five hundred gutter lines of the district municipal corporations (DMCs) of the city, which according to him, could cause catastrophic conditions in the city.

Mr. Sheikh said that construction work on three main gutter lines including Gujjar Nala, Mehmoodabad Nala, And Oorangi Nala, which was undertaken by the federal government, had already been near completion. He said that the huge amount of Rs 1,225 million had already been transferred to the accounts of the Sindh government as compensation for the residents, who were affected by those megaprojects. “The people are running from pillar to post to get payments due to slackness on the part of the provincial officers” he added.

He warned that a little amount of the rain on Monday was just a trailer and a single heavy downpour in the coming days and weeks could fully expose the performance of the Sindh government in Karachi.

The PTI leader said that in case of more predicted downpours in Karachi the conditions in low-lying areas could be disastrous and people had to face hardships adding he again held responsible high-ups of the Sindh government, who according to him, had turned blind eyes towards the basic issues of the Karachi and other districts of Sindh.

He lamented that he had been pointing out towards the choked gutters and the damaged drainage of the city but the people rulers thought it below their dignity to take the corrective measures. The PTI leader said that Murtaza Wahab Siddiqui, who had already failed to run two important ministries would not be allowed to become the administrator of Karachi adding he heaped scorns on him for his failure to stop the water contamination in the canals and other waterworks to bring any improvement in prosecution department.

“The law order situation was getting from bad to worse because the law minister was only trying to defend the corrupt practices being done by him and fellows and masters,” he added, asking Mr. Siddiqui to first stem the rot in his departments.

He said that Murtaza Wahab was only busy legalizing the illegal acts of the PPP rulers adding he said that the person who was rejected by the people of Karachi during the last general elections would not be allowed to play havoc with the infrastructure of the city. He said that Mr. Wahah to save his chair had belittled himself despite the fact his mother was a great and graceful lady.

He said that the education department was given to the person, who was interested in meddling in the affairs of the other departments, adding he asked him to mend his ways and try to improve the damaged education system.

The PTI leader said that the corrupt rulers instead of making any preparations to tackle any emergency situation during the current monsoon season were praying for more downpours so that they could earn money by giving funds to DCs of the districts. ” They always release funds to DC by first getting hefty amounts in bribe in such cases and those get affected due to breaches to dykes of canals and drains get nothing and are always forced to move to safer places” he added.

Mr. Adil also came down hard on the Sindh irrigation minister to ensure the just water distribution among the farmers of Sindh, who according to him, were still on the roads in a number of the districts demanding water for the crop cultivation.

The PTI leader said that it was a great mockery with the democratic norms that the members of opposition parties were not being given the membership in Public Accounts Committee adding he requested the senior leaders of PPP like Raza Raza Rabbanim Khursheed Ahmed Ahmed Shah, Sherry Rehman to take notice of such blatant violation being done in Sindh assembly. Mr. Sheikh warned of the dire consequences if the lawmakers were not inducted into the Public Account Committee.

Mr. Sheikh said that over the decades the functionaries of PPP governments had allotted the governments to their favourites and also occupied tens of thousands of the lands in every district of the province. He demanded the constitution of the judicial commission to probe such massive scams to control rulers from selling out the lands of the province.

The PTI leader said that the CV of PPP chairman Bilawal Bhutto Zardari was also submitted by Chief Minister Sindh Syed Murad Ali during his stay in America but the recent pictures from America showed that Mr. Zardari was yet to get an interview call. He said that Bilawal Bhutto, who had gone to the USA for the job at the cost of the sovereignty of the country would only get humiliation since brave Prime Minister Imran Khan had already refused to allow American forces to use Pakistani airbases by saying absolutely not He said that past record of the PPP leadership was riddled with serious stains of making compromises on the sovereignty of the country to get power by hook or by crook.