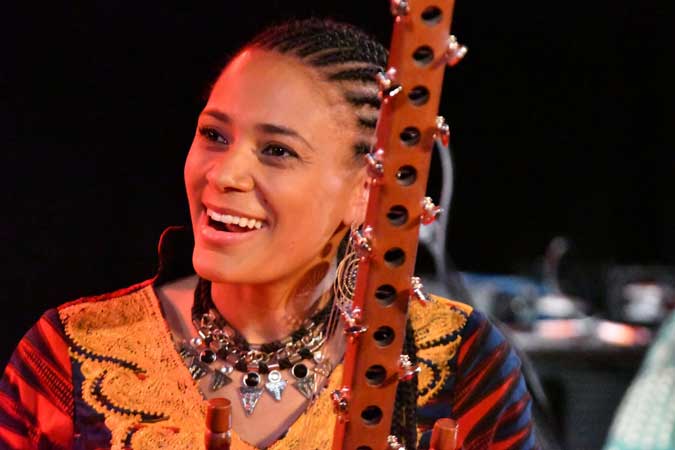 Sona Jobarteh – A Gambian singer and master of the kora, the 21-stringed African harp – and the first female kora virtuoso in the unique centuries-old African griot tradition, which brings together music, storytelling and oral history.

Muneera Pilgrim – A poet, artist and co-founder of female Muslim spoken word duo Poetic Pilgrimage, who’ll be both performing at and hosting the evening.

Rizwan Iqbal, Artistic Director and Producer of Salaam Festival says, “We are really excited to bring together musical disciplines steeped in centuries of tradition, poetry, the West African Griot tradition and the South Asian Qawwali tradition. As women, Muneera, Sona and Abi are reimagining these forms which were historically passed down and performed exclusively by men. Come to hear the sublime kora, Sufi lyrics over the sounds of an orchestra and messages of social change brought together by the spoken word.”

MIF takes place safely in indoor and outdoor locations across Greater Manchester from 1-18 July. It features a vibrant programme of original new work from across the spectrum of visual and performing arts and music by artists from over 20 countries.

Tickets for MIF x Salaam Festival are available from mif.co.uk.

Salaam Festival will take place in Manchester in summer 2022.

Salaam Festival aims to design and produce pioneering work through visual and performance arts. Working with diverse artists and creatives from Manchester and the rest of the world to showcase alternative narratives, identities and representation of Islamic art and Muslim culture.

Salaam Festival connects Manchester audiences and communities with the best of traditional and contemporary Islamic art and culture through an ambitious festival programme of premieres and commissions of visual arts, film, music, theatre, dance, literature and debate. Scheduled July 2022.

Our team has worked on and attended small to major world festivals and it is clear there is a certain demographic which cannot access most of these festival for various cultural reasons. This is why we are creating a festival on our terms for the people of Manchester and the World. We believe this is a world first because we are creating brand new work with artists and communities that has never been seen or experienced before, dreaming and exploring a new future for our art and culture.

These and other world-renowned artists from different art forms and backgrounds create dynamic, innovative and forward-thinking new work, staged in venues across Greater Manchester – from theatres, galleries and concert halls to railway depots, churches and car parks. MIF works closely with venues, festivals and other cultural organisations globally, whose financial and creative input helps to make many of these projects possible and ensures that work made at MIF goes on to be seen around the world.

MIF supports a year-round Creative Engagement programme, bringing opportunities for people from all backgrounds, ages and from all corners of the city to get involved during the Festival and year-round, as volunteers, as participants in shows, through skills development and a host of creative activities, such as Festival in My House.

MIF will also run The Factory, the new landmark cultural space currently being built in the heart of Manchester and designed by the internationally-renowned architect Ellen van Loon of Rem Koolhaas’ OMA. The Factory will commission, present and produce one of Europe’s most ambitious and adventurous year-round creative programmes, featuring bold new work from the world’s greatest artists and offering a space to create, invent and play.

Attracting up to 850,000 visitors annually, The Factory will add up to £1.1 billion to the economy over a decade and create up to 1,500 direct and indirect jobs. Its pioneering programme of skills, training and engagement will benefit local people and the next generation of creative talent from across the city, whilst apprenticeships and trainee schemes are already underway during the construction phase.