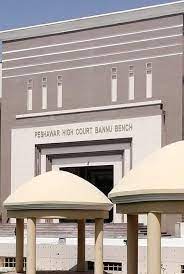 Addressing the occasion, he said the High Court Bannu bench is connected with the PHC through video linkage which would be improved through cyber link.

On the occasion, he also administered oaths from the newly elected cabinet members of PHC Bannu Bench.

Addressing the legal fraternity, he said that Pakistan is a blessing of Allah and it is joint responsibility to make it a strong democratic and stable state for the coming generation.

He emphasized upon lawyers of family courts to do utmost efforts to resolve family disputes especially between wife and husband amicably to remove resentment from society and strengthen the traditional family system.

The CJ said that on his way to Bannu he inspected the quality of work on Indus Highway and directed the concerned authorities to expedite construction work and ensure timely completion of the project so that the sense of deprivation among people of southern districts could be addressed.

Earlier, the CJ was briefed about the Bannu Bench project which was constructed on an area of 29 Kanals. The four storey building was constructed at a cost of Rs 950 million having three court rooms, six chambers for Judges, air conditioned mosque, basement parking for 250 vehicles and facility of shop at each floor.

CJ announced opening up of the Bank of Khyber branch in the building, health care unit, library, computers and other facilities for the lawyers.