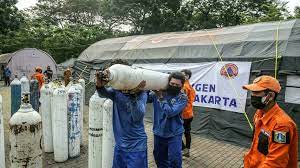 Indonesia said Tuesday it was importing emergency oxygen from neighbouring Singapore as hospitals crumbled under the weight of Covid-19, while the Delta variant wrought havoc around the globe.

On Tuesday, the United States began sending Vietnam two million doses, part of a first batch of 80 million doses that US President Joe Biden has pledged to allocate to countries struggling to tame the pandemic. But the World Health Organization said its global appeal to fund vaccines, treatments, diagnostics and equipment was still $16.8 billion short — almost half its total needs.

Vaccines are seen as the main hope of breaking a cycle of economy-busting lockdowns in a pandemic that has killed close to four million people, according to an AFP compilation of official data. But concerns have emerged that jabs initially seen as providing high protection against the virus may not be so effective against the Delta strain. Israel warned on Monday that rising cases suggested the Pfizer/BioNTech jab it is using might not guard so well against mild illness, even if highly effective in reducing severe disease and hospitalisations.

In Indonesia, a nightmarish Covid-19 wave has brought hospitals to their knees, forcing desperate families to hunt for oxygen tanks to treat the sick and dying at home. Nearly 1,000 Indonesian medical workers have died of Covid-19, including more than a dozen who were already fully inoculated. On Tuesday, Jakarta said about 10,000 concentrators — devices that generate oxygen — were to be shipped from nearby Singapore. Some had already been flown in on a Hercules cargo plane. The government said it was also in talks with other countries, including China. Senior minister Luhut Binsar Pandjaitan said the country was bracing for up to “70,000 (cases) per day at worst. “But we hope that won’t happen.” Russia, which is also battling a surge in cases, on Tuesday reported a new national record of 737 deaths over the past 24 hours. And Spain’s Catalonia region said it was reimposing virus restrictions such as closing nightclubs to try and tame a spike in infections, particularly among unvaccinated young people.

Britain too is seeing a spike in new cases and has warned that infections could more than treble to 100,000 a day. But although the Delta variant now accounts for nearly all new Covid-19 cases in Britain, mass vaccinations have stopped a resultant surge in hospital admissions or deaths. Prime Minister Boris Johnson announced the end of most virus restrictions in England. From July 19, people will no longer have to wear masks or maintain social distance indoors. The World Health Organization’s warning about its funding shortfall comes as the gap widens between rich and poor nations in their ability to fight the pandemic, with access to vaccines woefully uneven.

WHO chief Tedros Adhanom Ghebreyesus highlighted that those countries opening up again had the resources for mass vaccinations to mitigate a surge in infections. “Meanwhile, countries without access to sufficient supplies are facing waves of hospitalisations and death,” he added. Separately, the World Health Organization (WHO) has recommended the use of IL-6 inhibitors in addition to corticosteroids among patients with severe or critical Covid, prompted by the findings of new study. Published Tuesday in the Journal of the American Medical Association, it found that arthritis drugs tocilizumab and sarilumab reduce the risk of death and the need for ventilators among hospitalized Covid-19 patients. It was based on an analysis of nearly 11,000 patients.

London is hosting the Euro 2020 football semi-finals and final this week, with 60,000 fans allowed in at Wembley stadium — two-thirds of its capacity. Highlighting fears over the variant, England was forced to name an entirely new cricket squad on Tuesday for their one-day international series against Pakistan, after a coronavirus outbreak in the English camp. And Australia’s Formula One Grand Prix and MotoGP races were called off Tuesday for a second year in a row due to entry restrictions and logistical problems caused by the pandemic, officials said. Other major sporting events are also feeling the pinch, and none so much as organisers of the Tokyo Olympics, who are desperate to contain the virus when the Games kick off later this month. On Tuesday, organisers said fans would be urged not to line the route of the marathon over fears that crowds could spread Covid-19. Games president Seiko Hashimoto recently warned that a closed-door Olympics remained an option if infections got out of hand.