STOCKHOLM: Armand Duplantis failed in his bid to improve his own world record, but the Swedish pole vaulter still delighted home fans with yet another 6m-plus victory at the Diamond League meet in Stockholm on Sunday. Duplantis cleared 6.02 metres before having three efforts at 6.19m, failing all three times in his bid to better the 6.18m mark he made last year. Two-time world champion Sam Kendricks of the United States took second with 5.92m on countback from 2012 Olympic gold medallist Renaud Lavillenie of France. Just 24 other vaulters in history have managed to clear six metres, and Duplantis’ unerring consistency over that height marks him as a clear favourite for gold come the July 23-August 8 Tokyo Olympics.

The meet was well set up by Dutch athletics prodigy Femke Bol, who ran the fourth fastest women’s 400m hurdles of all time as she won in 52.37 seconds. Bol, 21, was pushed all the way by American Shamier Little, who finished second in 52.39sec, the fifth best of all time. The Dutch runner beat the personal best of 53.33sec she set at Thursday’s Diamond League meet in Oslo by almost a second. The European indoor champion in the flat 400m this winter narrowly failed to break Yuliya Pechonkina’s 2003 European record of 52.34. The Russian’s time was the world record until 2019 when American Dalilah Muhammad broke it. That time was bettered by compatriot Sydney McLaughlin, who ran 51.90 in Eugene, Oregon, on June 27. McLaughlin’s record run was mirrored in the men’s hurdles by Norwegian Karsten Warholm, who set a new men’s world best of 46.70sec in Oslo.

Alison dos Santos, like Bol also 21, finished second to Warholm on Thursday, but the Brazilian took advantage of the Norwegian’s absence to claim an impressive victory in the Swedish capital. Dos Santos clocked a personal best and South American record of 47.34sec, going 14th in the all-time list, while Cuban-born Turk Yasmani Copello took second in 48.19. There was also a victory in the women’s shot put for New Zealand veteran Valerie Adams, whose 19.26m sealed the win in her first meet on the elite track and field circuit in three years. 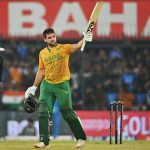