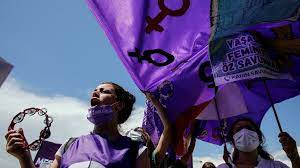 Turkey on Thursday formally exited a treaty combatting femicide and domestic abuse, in a controversial move by President Recep Tayyip Erdogan condemned by the West and rights groups.

Erdogan sparked outrage in March by pulling out from the world’s first binding treaty to prevent and combat violence against women, known as the Istanbul Convention. The 2011 pact, signed by 45 countries and the European Union, requires governments to adopt legislation linked to the prosecution of crimes including marital rape and female genital mutilation. Erdogan’s move came as he clings onto support from conservative and nationalist groups to maintain his 18-year rule. Justifying the decision, Erdogan’s top press aide Fahrettin Altun said the treaty’s references to gender-based abuses had been “hijacked by people attempting to normalise homosexuality”. The LGBTQ movement is “incompatible” with Turkey’s social and family values, Altun said. Major Turkish cities were convulsed earlier this year by student-led protests supporting broader rights.

Homosexuality has been legal in Turkey since the Ottoman Empire. But women’s rights groups accuse Ankara of withdrawing from the treaty to appease conservatives at a time when Erdogan’s ruling party is recording lower levels of support. The withdrawal was condemned by the European Union and the United States. Turkey’s highest administrative court on Tuesday rejected an attempt to annul the withdrawal, saying that Erdogan had the “authority” to make the decision. Rights organisations say Erdogan’s decision will put women at greater risk of violence when femicide is already prevalent in Turkey. Last year, 300 women were murdered in the country, according to the rights group We Will Stop Femicide Platform, while 189 have been killed so far this year. “The withdrawal sends a reckless and dangerous message to perpetrators who abuse, maim and kill: that they can carry on doing so with impunity,” said Amnesty International’s secretary general, Agnes Callamard.

There are protests planned for Thursday evening across Turkey, with a large rally in Istanbul to start at 1600 GMT. The Istanbul governorate banned a Pride march last weekend, which saw police use force while detaining dozens of protesters and pin an AFP photographer to the ground, prompting a formal complaint. The parade was held annually in Istanbul until 2015, an event which had been attended by thousands of people. Critics say the bans on the Pride march and the treaty withdrawal demonstrate a creeping Islamisation under Erdogan, who first came to power as prime minister in 2003.