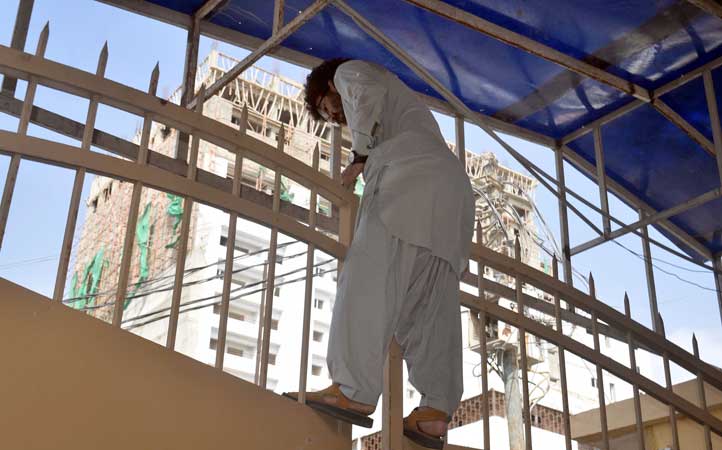 Speaker Sindh Assembly (SA) Agha Siraj Durrani has banned entry of PTI 8 members of SA in the provincial assembly for voicing protest and bringing cot in the house.

Speaker SA had ordered secretary assembly to probe into the matter. On the report of secretary SA, speaker Agha Siraj Durrani imposed ban on the entry of 8 MPAs of PTI in current session of assembly.

Speaker SA was of the view that the MPAs whose entry has been banned have insulted house.

On the other hand PTI leadership has said speaker has imposed ban on PTI MPAs under pressure from Sindh government and they strongly condemn it.

Pakistan Tehreek-e-Insaf (PTI) lawmakers here on Tuesday staged a protest sit-in at the main gate of Sindh Assembly against banning its eight PTI lawmakers from entering the Assembly building.

Two lawmakers also tried to climb up the gate to enter premises of the Assembly building as the main gate of the provincial assembly was closed for entrance. The lawmakers chanted slogans against the decision of Speaker Agha Siraj Durrani.

Talking to media persons, he said that they were forced to register their protest on the floor of the House after they were not allowed to speak during the concluding budget session. He alleged that Mr Durrani after taking dictations from the top PPP leaders, was doing grave injustice with the lawmakers from the Opposition parties.

He observed that such unprecedented moves were the black stain on the faces of the so-called champions of democracy.

Haleem Adil Sheikh said that the same Speaker under the pressure of PPP leaders had violated the democratic norms and did not allow him and the parliamentary leaders of PTI, GDA and MMA to speak on the floor of the House.”

When some of the MPAs registered their protest against such undemocratic fascist moves, their entries were banned, he added. “The PPP leaders want to make Sindh Assembly as their fiefdom and such moves will be resisted at the forums”, he added and asked Mr Durrani to stop treating the members of the Opposition parties as aliens. Enough is enough, now PPP rulers will not be allowed to make mockery of the democratic norms and to do corrupt practices, he said and add that they would register their protest vigorously against the injustices being meted out to them.

Haleem Sheikh said that he was himself not pleased the way the protest was registered by some angry PTI MPAs but there was also need to see the actual factors, which had forced lawmakers to adopt such modes of protest. “MPAs from the Opposition parties after getting no positive response from a biased Speaker were forced to bring the charpoys in the House” he added. He recalled that when PPP leader Nisar Ahmed Khuhro was the Opposition Leader in Sindh Assembly, he and other PPP MPAs after tearing and burning the budget books had thrown even at the female lawmakers.