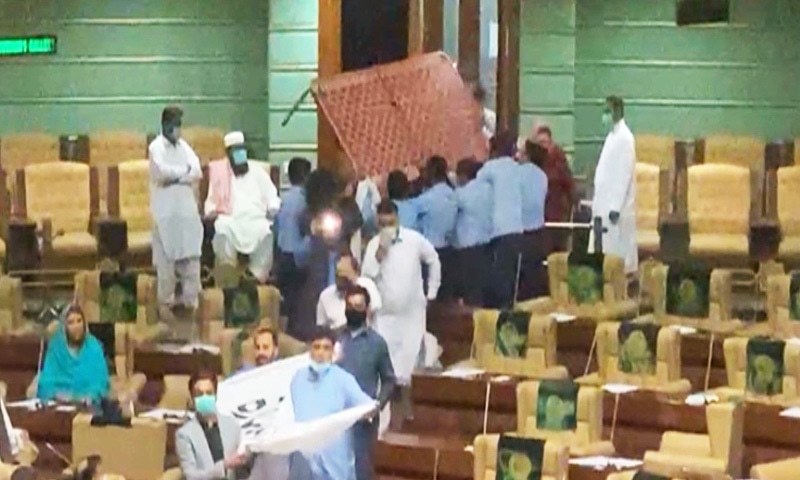 KARACHI: Opposition lawmakers on Monday brought a charpoy in the Sindh Assembly while terming it a coffin of democracy as the proceedings once again witnessed a rumpus.

According to the visuals captured during the provincial assembly proceedings, Opposition Leader Haleem Adil Shaikh could be seen leading the PTI lawmakers from the entrance of the assembly as they carry a charpoy with a banner over it inscribed with letters ‘Jamhoriyat Ka Janaza’ [coffin of democracy].

The lawmakers were, however, immediately intercepted by the assembly’s security, who did not allow them to move in with the bed as the MPAs, after a light scuffle, moved on with the banner only holding it from four sides like a coffin casket.

They later gathered in front of the speaker’s dice along with the banner.

Speaker Sindh Assembly Agha Siraj Durrani termed the act committed by the lawmakers against the rules and procedures of the provincial legislature.

Justifying their act, Haleem Adil Shaikh while speaking to media said it is PPP that has murdered democracy by bulldozing the voice of opposition parties in the assembly. “It is now 13 years since they are looting the people of the province,” he said.

Another PTI lawmaker Firdous Shamim Naqvi said that it is not new for the Sindh government to suppress democratic voices.

Spokesman for the Sindh government Murtaza Wahab while responding to the matter at a presser said that the speaker is the custodian of the house and he could take action against the involved lawmakers.