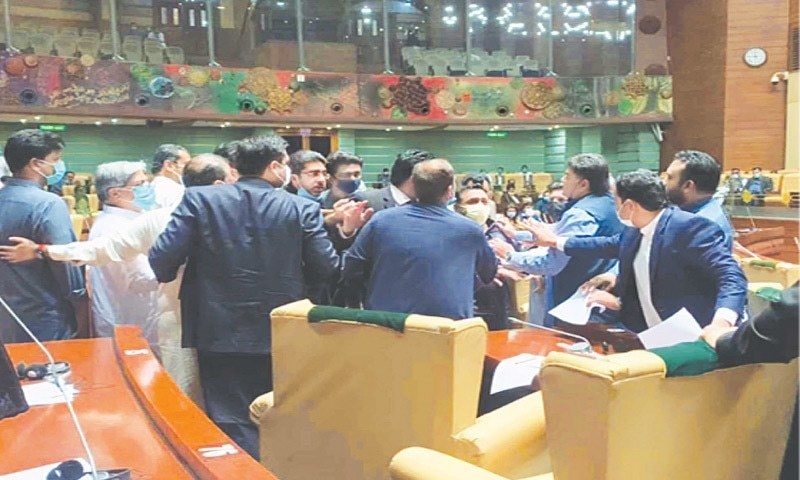 The Sindh Assembly on Tuesday became a wrestling ring after lawmakers belonging to the Pakistan Tehreek-i-Insaf (PTI) came to blows with three ‘rebel’ MPAs of the party who had refused to vote for the PTI candidate in the Senate elections.

The three MPAs, Aslam Abro, Shehryar Shar and Karim Bakhsh Gabol, had earlier announced that they will vote as per their aspirations in the March 3 Senate elections because they were not taken on board while awarding the tickets for the polls. However, on Tuesday, when the dissident lawmakers entered the assembly, some PTI lawmakers charged at them. A scuffle broke out, with lawmakers shoving each other and chanting slogans as the security staff and the speaker appeared helpless in maintaining the order.

Among the dissident group, Shehryar Shar was the first one to enter the provincial assembly, who triggered PTI lawmakers to shout slogans against him while Pakistan People’s Party (PPP) legislators cheered and clapped for him. Later, Karim Gabol, another dissident PTI lawmaker, walked to the attendance register, following which PTI lawmakers leaped towards and pushed him. All hell broke loose in the assembly when Gabol was approached by his fellow lawmakers including Khurrum Sher Zaman, Saeed Afridi and Bilal Ghafoor who approached him even before he could take his seat and asked him to come with them.

After a brief argument and subsequent scuffle, Gabol was escorted out of the assembly by PTI lawmakers, made to sit in a car and driven away. Meanwhile, the other two dissident MPAs – Shar and Abro – remained on the PPP’s side and left the house with the treasury members. The deputy speaker adjourned the session until Wednesday (today), when polling for the Senate elections will take place. Speaking to media after the session, dissident lawmaker Aslam Abro alleged that Karim Gabol had been ‘kidnapped’ by the PTI lawmakers. He said he and other dissidents would remain part of the PTI and will vote “according to our conscience” during the Senate polls, while reiterating that he would not vote for the PTI candidates.

Talking to media outside the assembly, PPP’s Shehla Raza said that MPAs were strapped and smashed during the session. “We tried to stop them but they did not even listen. All three members had come to us and we did not force anyone,” she said. “Every MPA is free to vote in the elections. This is not the way to kidnap members from the house.”

Meanwhile, Sindh Minister for Information Syed Nasir Hussain Shah said that whatever happened in the assembly is condemnable and this should not have happened.

On Monday evening, PTI leader Khurram Sher Zaman had told a press conference that three MPAs of his party had been allegedly abducted as their phones were switched off and they were not even in touch with their families. However, he only identified one of the three MPAs as Karim Bux Gabol. However, in a video message, Abro and Shar both denied that they were abducted, saying they were upset with the PTI’s decision to grant Senate tickets to Faisal Vawda and Saifullah Abro.

Later, at a press conference in Islamabad, Special Assistant to the Prime Minister on Political Communication Shahbaz Gill, while apparently referring to Gabol, said the MPA had disclosed that he was forced to record the video against the PTI ‘under pressure’. He suggested that the lawmaker had been ‘abducted’ by the PPP, saying the background in the video uploaded by one of the dissident MPAs was the same as seen in some pictures of PPP leaders shared on Twitter. According to reports, six of PTI’s lawmakers are likely to not cast votes for the party’s candidates in the Senate elections, while three more MPAs, including a lawmaker elected on a minority seat, have allegedly ceased contacts with the PTI leadership.