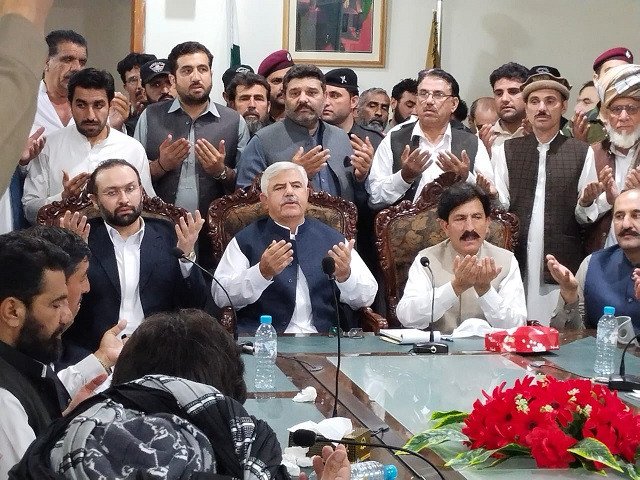 Janikhel tribes ended their month-long sit in protest in Bannu today. The decision came after negotiations with the district administration proved successful on Sunday.

The tribes ended the protest and buried their slain elder, Malik Naseeb Khan, after a month of his murder.

Talks between the district administration and a committee of the protesters were held for the fourth consecutive day at the Maulana Khan Nawaz Jirga Hall at Azad Mandi on Sunday.

Earlier, the members of the committee of protesters and officials of district administration had held talks to sort out issues for three straight days. However, talks remained inconclusive.

To foster goodwill with the protestors, the district administration released four persons who had earlier been arrested for protesting and assured them that all demands would be met, as per their previous agreement.

A seven-member committee of the Ahmadzai and Utmanzai tribes was constituted to liaison with government officials and apprise them of the losses suffered by the Janikhel tribes during the sit-in and a march towards Islamabad, recently. The committee members include Malik Umar Hayat, Malik Mir Samad, Malik Fida, Malik Gulbaz Khan, Gul Paozar, and Jehan Noor.

The Janikhel tribesmen had refused to bury their tribal elder, Malik Naseeb Khan, and had been staging a sit-in protest for almost a month, demanding their arrested persons be released and for the agreement between the government and the tribesmen to be implemented.

They also demanded recovery of all missing persons, restoration of lasting peace in the area, compensation for affected families, and others.

Elders who protested said they said they were tired of burying their loved ones and wanted an end to the targeted killings.

The Janikhel tribesmen cited the case of four young persons who had gone missing. Their bodies had later been found, charred.

They demanded a thorough investigation into the crime and for the culprits to be severely punished.