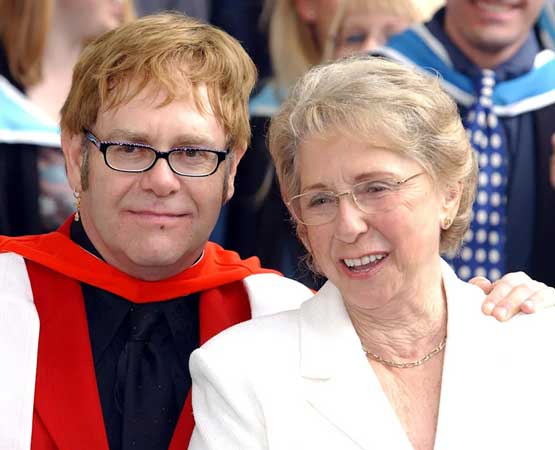 Sir Elton John has said it was a “big shock” when his late mother Sheila Farebrother objected to his civil partnership with David Furnish.

The 74-year-old singer has explained that while she was “very easy” when it came to him coming out, it was a different story when he and Furnish wanted to make more of a commitment to each other.

He made the comments while in conversation with singer Rina Sawayama as part of YouTube’s Pride 2021 events.

“It was so upsetting, she kind of ruined my day. Our day, rather, by her attitude. And for all those years I thought she was so supportive and in the background there was a mild homophobia going on within her.”

He went on: “Because I was actually tying the knot with David and then getting married a few years later, she didn’t approve of it at all. And that came as a big shock to me.”

The couple, who share sons Zachary, 10, and Elijah, eight, entered into a civil partnership in 2005 before marrying in 2014.

The ‘Your Song’ hitmaker has previously opened up about his difficult relationship with his mother, and the remark she made about Furnish that led to them not speaking for seven years.

She died in 2017 at the age of 92, although she and Sir Elton had rekindled their relationship before her passing.

Bryce Dallas Howard played Farebrother in his Rocketman biopic opposite Taron Egerton, who starred as the musician.