* MQM sowing seeds of hate, does not represent Karachi 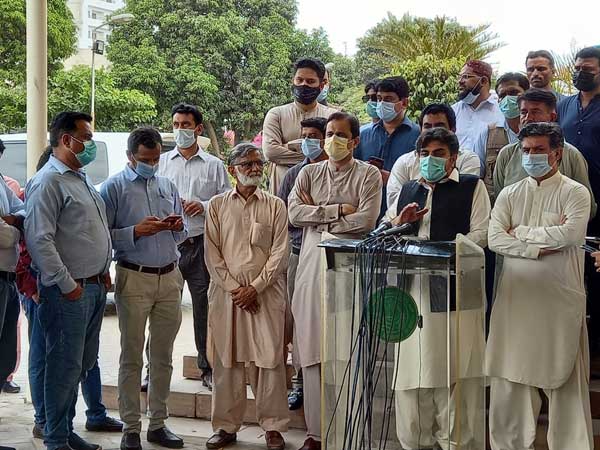 Sindh Minister for Information and Local Government Syed Nasir Hussain Shah on Thursday said that in line with the vision of Chairman Bilawal Bhutto Zardari, the Chief Minister Sindh and his team have given the best budget in difficult circumstances, despite deduction of more than Rs 80 billion in federal transfers in the current financial year.

The Minister said that PPP has always been a victim of conspiracies hence the party is fully equipped to counter these conspiracies and added that by the grace of almighty the budget would be approved on Friday.

He expressed these views while talking to the media at Sindh Assembly Media corner, along with Provincial Minister for Mines and Mineral Development Shabir Ali Bijarani and Provincial Law Adviser Barrister Murtaza Wahab.

Shah said that PPP had always followed politics of reconciliation but other political parties had reciprocated with politics of hypocrisy.

The minister said that what was happening in the Sindh Assembly was against the agreed principles of the budget session. He said that the Speaker of the Sindh Assembly had invited the opposition to ensure a peaceful atmosphere in the session, which was attended by Pakistan Tehreek Insaf and Grand Democratic Alliance, while Muttahida Qaumi Movement Pakistan stayed away.

He added that on the insistence of opposition parties all the members of Sindh assembly were invited to raise the issues of their constituencies and one day was extended in the assembly session.

But lamenting the MQM, Shah said that the MQM party members had been making noises during the speeches of government members and had caused uproar in the assembly for two days.

“The MQM submits hundreds of cut motions every year, but this year they have not filed a single cut motion on the budget . It seems to me that someone has conspired against them,” the minister said.

He said that MQM was shedding crocodile tears by alleging that nothing has been kept for Karachi in the budget. He said that Rs 991 billion schemes were underway in Karachi while Rs 91 billion has been earmarked for development schemes in the next financial year 2021-22.

He said that those who made claim for the mandate of Karachi, have not even a single MPA seat in three districts including in Malir, South and East. They are once again sowing the seeds of hate. The Minister added that MQM alleged PPP for carrying out the economic massacre of Karachi, which was misleading and trying to play with emotions of people of this city. He said that MQM was a party which had carried out physical massacres in Karachi and hundreds were burned alive in Baldia factory by those so called “Nafees Log”.

Replying to a question, Shah said that “Demand of the southern province was actually connected to the mind-set of Jinnah pur,” adding that the people of Karachi have discarded the politics of hatred.

To another question, he said that the Sindh government will allow political gatherings and rallies but will not allow anyone to take law into hand. He said that there were pictures of Altaf Hussain in Bahria Town protest, while questioning why the slogans of ‘Long live Altaf’ chanted during Bahria town protest. Urdu speakers and Sindhi must understand this conspiracy. He said that such politics will not work now. Now, politics of Pakistan and development will flourish in the country.

On the occasion, Provincial Minister for Mine and Mineral Development Shabir Ali Bijarani said that Haleem Adil Sheikh has accused him of sponsoring dacoits. He demanded Haleem Adil to correct the record. Bijrani said that his family had been in politics from the pre-partition period and his father and grandfather had always done the politics of nobility. My grandfather had voted in favour of the Pakistan resolution. Lamenting, Haleem Adil Sheikh, said that Sheikh entered politics in recent years and has been promoting chaos in politics.

One can guess the mentality of such a man, who has- replaced his own party opposition leader Firdos Shamim Naqvi by oechetrating a conspiracy, he said adding that that he has served legal notice to Sheikh through his counsel and if no reply is received within 15 days, legal action would be initiated against him, Bijrani warned.