* 21 others injured in blast, some of them in a critical condition
* IGP says policemen manning a checkpoint next to Hafiz Saeed’s house were the target 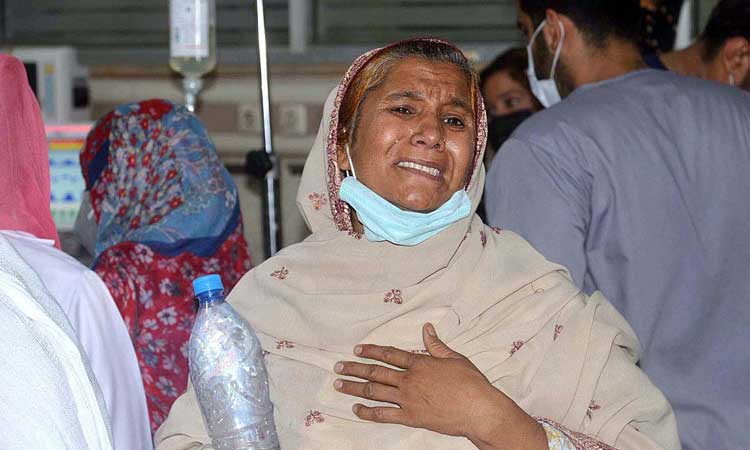 A bomb attack in a residential area of Lahore killed four people on Wednesday, including a child, and wounded 21 others, police said.

Among those wounded in the powerful blast were some police officers manning a checkpoint next to the house of Hafiz Saeed, the jailed founder of Lashkar-e-Taiba (LeT). “Apparently what we see is that our law enforcement agencies are the target,” provincial police chief Inam Ghani told reporters. “You can see our police officials are also wounded.” Three people were killed, Ghani said. A police spokesman later said a four-year-old child had succumbed to his wounds. Some of those wounded, including children, were in critical condition, a hospital spokesman said.

A car parked close to a house had exploded, setting ablaze nearby cars and motorcycles, a witness, Fahim Ahmad, told reporters at the scene.

Ghani said police were investigating whether the explosives were detonated remotely or by a suicide bomber. If not for the police checkpoint, the car could have reached Saeed’s house, he added.

A spokesman for Jamat-ud-Dawa told Reuters that Hafiz Saeed is in prison and so not at his home on Wednesday.

Rescue, police, and bomb disposal teams reached the site of the incident soon after the blast. Witnesses said the windows of nearby houses and buildings were shattered in the explosion. In addition, one of the buildings was severely damaged due to the intensity of the blast. Several cars parked close to the buildings were also damaged.

The injured, 21 so far, were shifted to Lahore’s Jinnah Hospital via private cars and auto-rickshaws for treatment. Four persons succumbed to their injuries during the treatment, the medical superintendent of the hospital said.

An eyewitness told a private TV channel that an unidentified person parked a motorcycle near the house, which later exploded.

A preliminary report of a probe by investigative agencies has been submitted to Inspector General Punjab Inam Ghani. More than 30kg of explosives were used in the blast, according to the initial report, which adds that ‘foreign-made materials’ were used. Ball bearings, nails and other explosives were among the objects used in the bomb.

The initial report states that the material had been planted onto a car and the device was detonated remotely. A three-foot deep and eight-foot wide crater has formed at the site of the blast, the report said. The blast caused damage within a 100-square-foot radius.

IGP Ghani said the Counter Terrorism Department is probing the incident and a detailed report will be shared about the nature of the blast and the material used. “We are not sure what caused the explosion or whether it was a planted device [that caused the explosion], or a suicide blast,” he said at the time.

In response to a question whether Hafiz Saeed – the leader of the outlawed Jamaat-ud-Dawa (JuD) was the target – Ghani said, “There is a police picket near the house of a high value target, which is why the vehicle could not have gone near the house.”

Jinnah Hospital Medical Superintendent Dr Yahya Sultan, while talking to reporters in the afternoon, said seven of those admitted to the hospital were in critical condition with ‘ball bearing and blast injuries’. He added that the injured included two women, one of whom was pregnant and had to be put on a ventilator.

A first information report (FIR) was also registered under various sections of the Pakistan Penal Code, Anti-Terrorism Act and Explosive Substance Act against unknown persons at the CTD police station in Lahore. The FIR stated that some officers of the CTD were present near Jinnah Hospital during a search for members of a proscribed organisation when they heard a loud explosion from the Jauhar Town area. “The blast was so strong that a deep hole had formed at the site of the explosion and the doors and windows of nearby houses had been broken and the cars parked nearby had been damaged,” the FIR said. “It was found (through initial investigation) that a big amount of explosive material was detonated in a vehicle,” it added.

Meanwhile, Punjab Chief Minister Usman Buzdar took notice of the blast, and directed the IG to investigate the incident and submit a report. “Those responsible for the blast should be brought under the law,” he said.

He told authorities to provide the best medical facilities to those who were injured, while also directing officials to impose an emergency at Jinnah Hospital. He said the Punjab government stands with the victims and their families. The incident is being investigated under the supervision of the additional IG CTD, he said, adding that Punjab Health Minister Yasmin Rashid was in the field to ensure that those injured were being provided the best medical treatment. agencies