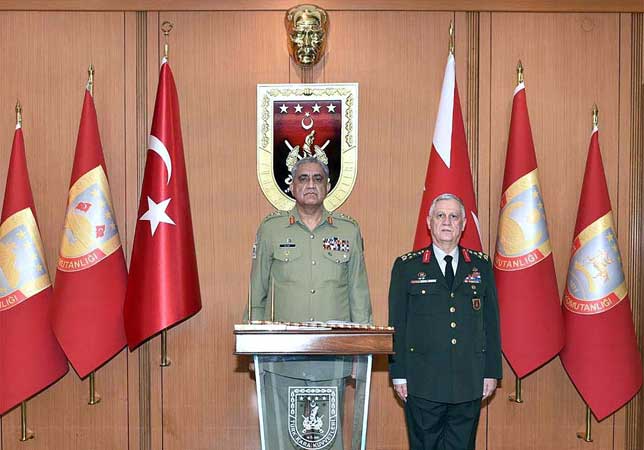 Pakistan and Turkey have pledged to continue to work together for further strengthening the relations between two brotherly countries.

According to a statement issued by the Inter-Services Public Relations (ISPR), Commander Turkish General Staff General Yasar Guler and Commander of the Turkish Land Forces General Umit Dundar were also present in the meeting. The army chief is on a day-long official visit to Turkey, said the statement.

During the meeting, matters of mutual interest, regional security situation including recent developments in Afghan Peace Process and bilateral defence and security cooperation in various fields were discussed.

The army chief acknowledged the Turkish engagements with Pakistan, especially the ongoing efforts for continuing the positivity for peace in the region. He also reiterated that Turkey is one of the key Muslim countries in the region and enhanced Pakistan-Turkey cooperation will have positive impact on regional peace and stability.

Earlier on arrival, the army chief was also presented with a guard of honour by a smartly turned out military contingent.

A day earlier on Tuesday, Chief of Army Staff (COAS) General Qamar Javed Bajwa met senior military leaders of the Republic of Azerbaijan during the two-day official visit to the country.

During the meeting, matters of mutual interest, bilateral defence and security cooperation, regional peace and stability and cooperation in energy, trade and connectivity projects between both brotherly countries were discussed.

The army chief said that, “The emerging geo-strategic paradigm in the region necessitates our close cooperation and collective response against common challenges.” The COAS also reiterated increased mutually beneficial engagements at all levels and forums.

The dignitaries also acknowledged high standards of professionalism of the Pakistan Army and contributions for conflict prevention in the region, especially efforts for bringing peace in Afghanistan.