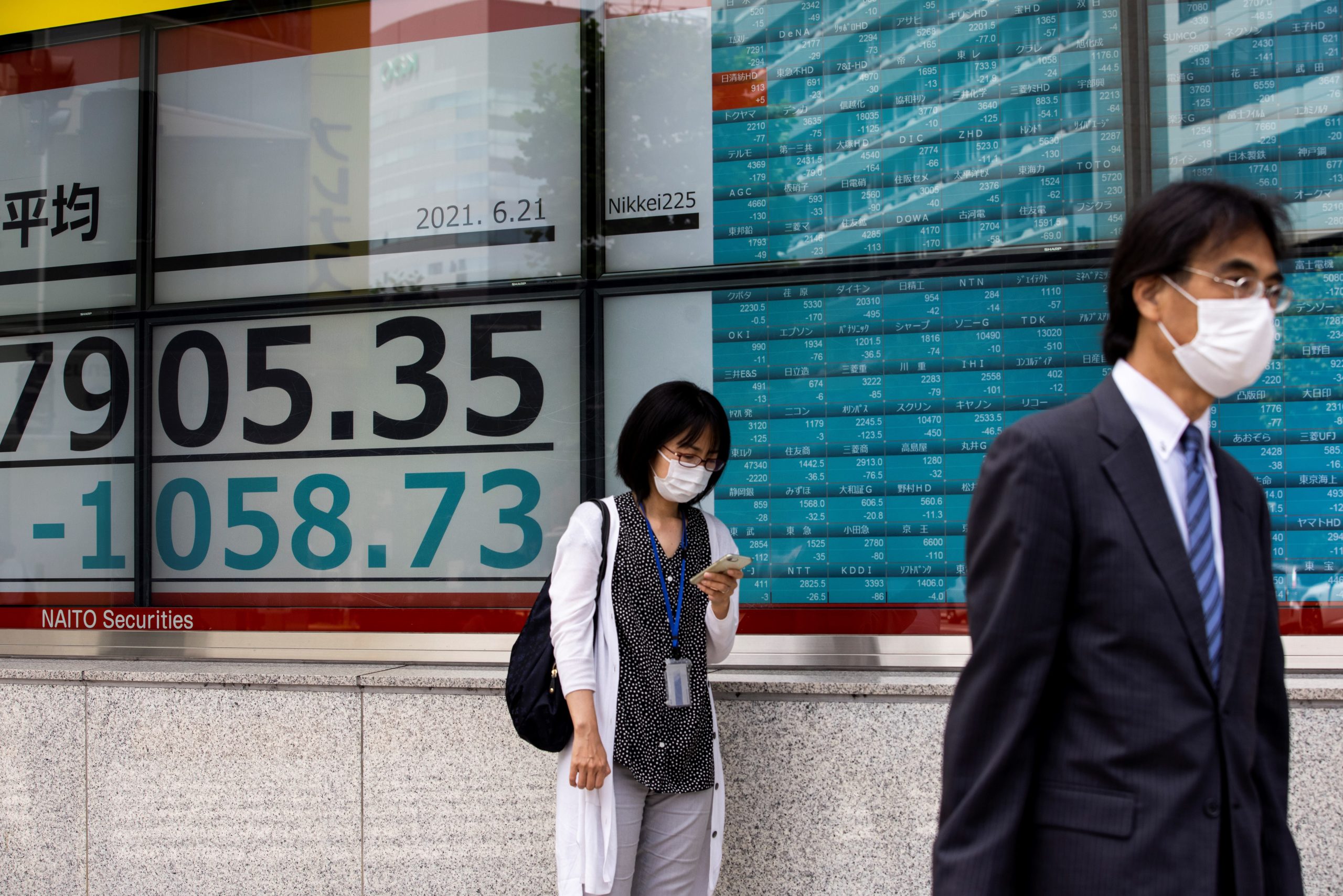 Asian markets tumbled Monday on growing expectations the US Federal Reserve will begin lifting interest rates as early as next year as it looks to prevent the economic recovery from overheating.

In a bid to soothe traders fretting over surging inflation, central bank officials have for months pledged to maintain their ultra-loose monetary policy until the rebound was well on track. But last week it brought forward its forecasts for tightening. The news was initially broadly taken in stride by investors as the Fed’s so-called “dot plot” outlook for rates suggested it would not begin hiking until 2023, and would discuss winding down its bond-buying programme later this year.

But investors were spooked by comments from St Louis Federal Reserve President James Bullard that liftoff could come as soon as late 2022, adding that it made sense for officials to become “a little more hawkish” as inflation surges. That sparked hefty losses on Wall Street, with the Dow and S&P 500 dropping more than one percent and the Nasdaq almost one percent. And the selling continued in Asia, with Tokyo leading the way with a more than three percent fall, while Hong Kong, Sydney, Singapore, Taipei and Bangkok all lost more than one percent. There were also losses in Seoul, Wellington, Manila, Mumbai and Jakarta, though Shanghai ended slightly higher.

London and Frankfurt rose in early trade but Paris edged down. “We had expected the Fed to start discussing tapering at last week’s meeting and to upgrade its interest rate forecasts,” said Mansoor Mohi-uddin at Bank of Singapore. “But the central bank’s tweaks clearly surprised the markets. Thus, in the near-term investors may keep unwinding reflation trades.” Still, the losses were not a surprise to some observers, as many markets are at record or multi-year highs and investors were taking the opportunity to cash in profits.

“The shift toward tapering and a pull forward in first rate hikes may cause bouts of nervousness in markets with shares vulnerable to a decent correction,” said Shane Oliver of AMP Capital. “But note that tapering is not monetary tightening (it’s just slower easing) and rate hikes are still a fair way off in most developed countries.”

And Kerry Craig of JP Morgan Asset Management added: “We believe that market jitters over the latest Federal Reserve meeting will pass, as inflation appears to be mostly transitory and the growth outlook continues to be positive.” Others said the pullback would likely be seen as healthy because many stocks appeared to be somewhat overvalued. There is also a feeling that while the Fed will begin discussions on tapering its vast bond-buying programme this year, the bank’s target of full employment was still some way off and talks on the wind down would likely take some time.

Oil prices extended Friday’s gains on growing optimism the global recovery will ramp up demand, with some experts suggesting it could go as high as $100. The gains come after the dollar-priced black gold tumbled in the middle of last week as the prospect of higher interest rates sent the greenback higher, making it more expensive for buyers using other currencies. Support also came from talks between world powers and Iran over Tehran’s nuclear programme ending with no deal.

Prices have been weighed recently by the possible return of Iranian oil to world markets if US sanctions are lifted after the signing of a new deal. “The market is quickly coming around to the view that, with demand rebounding so strongly over the northern hemisphere summer, additional supply will be required,” said Daniel Hynes at Australia and New Zealand Banking Group Ltd. “With OPEC remaining cautious and little chance of Iranian oil hitting the market soon, the market looks likely to remain fairly tight in the next few months.”