Where has Sindh utilised Rs 1.8tn given by Centre in two years, asks Fawad 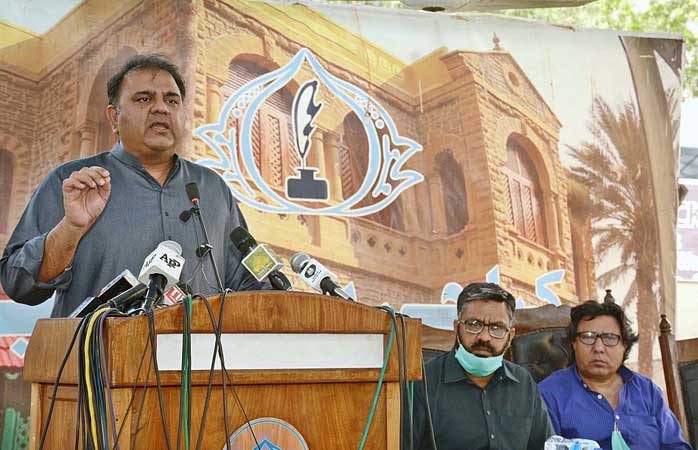 Information Minister Fawad Chaudhry has said that Pakistan Tehreek-e-Insaf (PTI) believes in supremacy of the parliament and wants to settle all issues in the house to strengthen the democracy.

Addressing a press conference at Karachi Press Club on Sunday, the minister said that the government has introduced amendments to reform the electioneering system in the parliament but the opposition is convening all parties’ conference out of the ambit of the parliament.

The minister said the opposition has neither any agenda for progress of the country nor it has any foreign or economic policy. Fawad said that the unnatural alliance of opposition parties would not succeed in its agenda of protection of vested interests as they lack vision and public support. He said that Prime Minister Imran Khan has a clear agenda for long-term growth, uplift and sovereignty of Pakistan.

Stressing on monitoring of development budget, he said that a mechanism is in the offing for monitoring of Public Secotr Development Programme (PSDP) projects so that proper utilisation of funds and relief to the masses could be ensured.

“Why is this money not being spent on Karachi’s uplift?” he asked and added that the money received in the name of Ghotki by the provincial government would have turned the area into Paris if utilised properly.

“What is the situation in Larkana where billions of rupees have been spent?” he asked and added when they are asked about the utilisation of funds, the PPP starts raising hue and cry.

He demanded of the Supreme Court of Pakistan to ensure the implementation of Article 140-A of the constitution across Pakistan, especially in Sindh.

Fawad said that it is unfortunate that the enemies of the Sindh province are currently ruling it. “This was the last election they won as next time Imran Khan will personally lead the election campaign in the province,” he said, adding that there is no alternative to the PTI government in the country.

Speaking over water theft issues, he said that IRSA launched an investigation into claims of water theft by Punjab from the Sindh government. However, he said when IRSA took measures in this regard, CM Sindh Murad Ali Shah ran away from it.

“They denied the IRSA team from collecting a record of entry and exit of water,” he said and asked as to why the land of Murad Ali Shah and Faryal Talpur never witnessed water scarcity.

Speaking on issues of the journalist fraternity, he informed that the PTI government is committed to the provision of facilities to journalists across the country, and relevant matters are being channelised.

Separately, addressing the celebratory opening ceremony of Dubai Expo’s Pakistani pavilion, Fawad Chaudhry said that such expos hold key importance when it comes to bringing countries together and their innovations to the fore.

He said the Ministry for Information will contribute to making the Pakistani pavilion a success at the Dubai Expo 2020, which was supposed to happen last year but was delayed due to Covid-19. He said the team deserves praise and felicitations for making a remarkable design of the pavilion.

“We are happy it’s happening in the UAE this time. The UAE is like our second home and there we will help realise the potential of the hidden treasure that Pakistan has,” Chaudhry said.

Gone are the days when Pakistan was deemed notorious for its export of terrorism and extremism, said Chaudhry, adding that now Pakistan is known for its IT and agricultural exports. He said this expo will avail Pakistan a great chance at branding its services and claim its stake in the global trade.