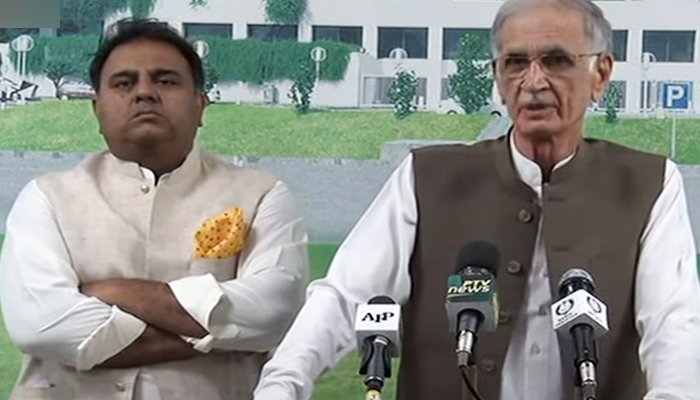 ISLAMABAD: Defence Minister Pervez Khattak on Thursday announced that the government and Opposition have reached an agreement to run the National Assembly ‘in an orderly manner’.

The announcement came days after the Treasury and Opposition benches sparred over the federal budget for the 2022 fiscal year.

Flanked by Federal Information Minister Fawad Chaudhry, Khattak said during his press conference that PTI, PPP and PML-N leaders met with NA Speaker, Asad Qaiser to discuss the situation and that Qaiser would announce the details later.

Qaiser had earlier held a meeting with Opposition leaders in order to end the deadlock after three days of pandemonium.

During his meeting with PML-N and JUI-F leaders, Qaiser requested both the Opposition and government lawmakers to cooperate in ensuring a peaceful environment in the assembly. Rana Sanaullah, Sardar Ayaz Sadiq, Rana Tanveer and Maulana Asad Mehmood were present at the meeting.

Khattak said that the incident in the assembly was not a good omen for the Constitution and democracy and condemned the unfortunate events in the house. All members must respect each other, he said.

Chaudhry meanwhile noted that detailed discussions were held with Opposition leaders on the matter. The minister said that the meeting had also discussed enhancing the powers of the NA Speaker while he hoped that the no-trust motion would be taken back against Deputy Speaker Qasim Suri.

Later, PPP’s Raja Pervez Ashraf said the government has agreed to review the legislation done in haste and in return the Opposition would consider withdrawing the no-confidence motion against Suri.