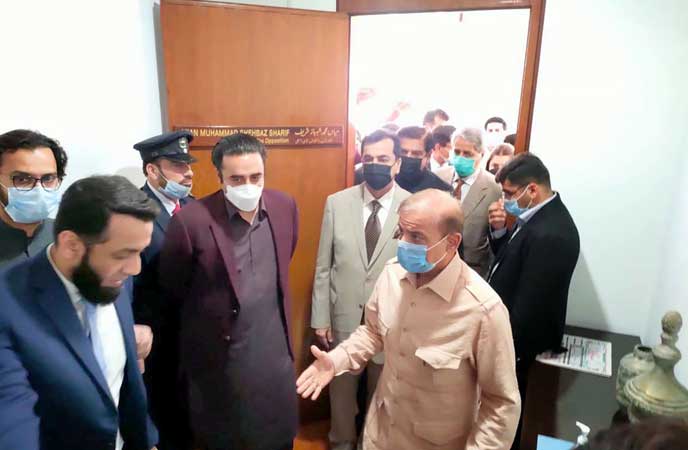 The decision to tabling the no-confidence motion was made when PML-N President Shehbaz Sharif and PPP Co-Chairman Bilawal Bhutto Zardari met in the NA on Wednesday to discuss the way forward after Tuesday’s rowdy session of the Lower House. PML-N’s Ayaz Sadiq, Rana Sanaullah and Marriyum Aurangzeb and PPP’s Yousuf Raza Gilani, Shazia Marri, Naveed Qamar and Raja Pervaiz Ashraf were also present during the meeting between the two opposition leaders.

The two sides regretted what had happened a day earlier in parliament, observing that it was the darkest day in the history of democracy. They maintained that the speaker had failed to fulfil his constitutional, legal, democratic and parliamentary responsibilities. They also agreed to form a committee that would be tasked with tabling the motion. However, the names of its members are under deliberation as yet.

The joint opposition also rejected the NA speaker’s decision to ban seven members of the Lower House who used foul language in Tuesday’s session. They also formed a committee that would be tasked with tabling the no-confidence motion against the speaker. The committee includes PPP’s Shazia Marri, Naveed Qamar and Raja Pervaiz Ashraf and PML-N’s Ayaz Sadiq and Rana Sanaullah as well as two members from the JUI-F.

Shehbaz claimed that the events during Tuesday’s session had turned the lower house of parliament into a laughing stock and everybody saw what the ministers had resorted to. He thanked Bilawal and other PPP leaders for coming over and expressing solidarity with the PML-N.

Bilawal said Shehbaz represented the opposition in parliament and the ministers had “disgraced” themselves through their behaviour with him. “We have come here to express solidarity with Shehbaz Sharif,” he said. “We have consulted on the future political strategy. We will work together,” he added. “The prime minister is instructing his ministers like children. We are serious politicians and the PPP and the PML-N will chalk out their future course of action together.”

Bilawal condemned the unparliamentary conduct of the government during the session of the National Assembly.

He called out the public representatives for misbehaving in the parliament and tarnishing the honour of the House. He also called out the prime minister and his government for raising a ruckus to conceal the flaws of the federal budget. “It is evident the selected prime minister wants to cover up his incompetence by supporting and encouraging abusive language and the indecent conduct of his members,” he said. Highlighting how unfitting such a conduct is, the PPP chairman stated that such a non-serious attitude is a deplorable tradition to be set in the parliament. “The government parliamentarians have violated the sanctity of the House by adopting a shameful and intolerable attitude,” he asserted.

Shehbaz Sharif said that the whole nation saw on their TV screens how the ruling party resorted to hooliganism and even naked abuses were hurled during the session. In a post on Twitter, the PML-N leader said, “Only goes to show how ethically shallow Prime Minister (PM) Imran Khan and his whole party are and how Pakistan Tehreek-e-Insaf (PTI) has turned into a fascist and abusive party. Unfortunate!”