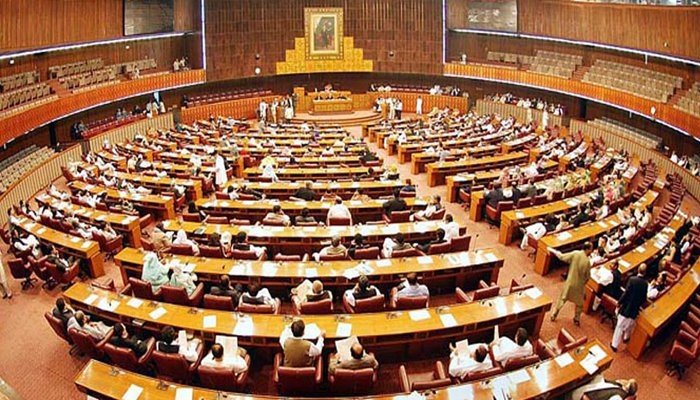 In the light of the investigation, members responsible have been barred from entering the House. These include the names of; Ali Gohar Khan of Grand Democratic Alliance, Chaudhry Hamid Hameed and Shaikh Rohale Asghar belonging to PML-N, Syed Rafiullah from Pakistan’s Peoples Party (PPP), Ali Nawaz Awan from Pakistan Tehreek-e-Insaf (PTI), Abdul Majeed Khan Niazi and Faheem Khan from PTI.

In the commotion that ensued in the House yesterday, Minister of State for Information and Broadcasting Farrukh Habib said that the cornea of ​​Malika Bukhari‘s left eye was affected in the attack by opposition members. “They don’t even care about the dignity and sanctity of women,” he said.

On the other hand, PML-N spokesperson Maryam Aurangzeb said that what happened in the parliament yesterday is very unfortunate, the government did not attack the opposition but the parliament, abusing the ministers in the meeting and attacking and blocking Shahbaz Sharif’s speech.

During the meeting, the speaker said that such behavior could not be tolerated in the parliament and strict action would be taken against those involved in the riot. According to sources, the issue of ban on rioting members of the National Assembly will be raised in the House.

As PTI MNAs surrounded the former Punjab chief minister, PML-N lawmakers and other Opposition members formed a protective circle around him. The jeering and slogans got louder as Sharif took aim at the government.

Speaker Asad Qaiser kept interjecting, requesting lawmakers on the treasury benches to refrain from shouting while the leader of the Opposition spoke.

However, no one listened and the Opposition leader continued, wearing headphones to drown out the noise while tempers rose when the government and Opposition lawmakers came face-to-face.

The opposition members set up a security fence around Shahbaz Sharif and chanted slogans against each other.

Deputy Speaker Qasim Suri said that the opposition is facing a reaction to what it has sown in the last two and a half years.