* Because on the evening of Friday, Angelina Jolie visited her first ex-husband Jonny Lee Miller, who famously co-starred with her in
the 1995 movie 'Hackers' 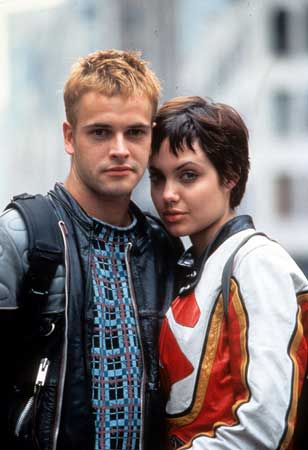 Angelina Jolie was not alone during her visit to see ex-husband Jonny Lee Miller.

Bennifer 2.0 is pretty cool but about this “Crash and Burn” reunion?

Because on the evening of Friday, June 11, Angelina Jolie visited her first ex-husband Jonny Lee Miller, who famously co-starred with her in the 1995 movie Hackers, at his $3 million apartment in Brooklyn, New York. The news was first reported by Page Six on Saturday, June 12.

The 46-year-old star was photographed entering the building wearing a long tan trench coat and face mask and carrying a Louis Vuitton purse and a bottle of Peter Michael wine, which typically cost a couple hundred dollars. She left the building after a few hours later that night.

On Sunday, June 13, a source close to the actress told E! News that the 48-year-old British-born actor’s son and Jolie’s youngest boy Knox, 12, are friends and that they were also there that night. Jolie and Miller have been good friends for years, the insider added.

On Saturday, June 12, the morning after the visit, the Elementary actor was photographed going for a run in the rain in the same neighbourhood.

Jolie’s outing comes days after she began a trip to New York City following her birthday with all six of her and ex Brad Pitt’s children. The family flew there more than a week after a court granted the actor joint custody of five of the kids, who are juveniles. Jolie and Pitt, also parents of 19-year-old Maddox, split more than five years ago, with the actress filing for divorce.

Miller co-parents his son with actress and model Michele Hicks, who he wed in 2008. According to iMDB, the two divorced in 2018.

In 2017, when asked if he keeps in touch with Jolie, Miller told Stuff.co.nz, “Yeah – we’re still friends.” In 2014, the actress told BuzzFeed the actor was “still a great friend.”

The 46-year-old star was photographed entering the building wearing a long tan trench coat and face mask and carrying a Louis Vuitton purse and a bottle of Peter Michael wine, which typically cost a couple hundred dollars

Miller has supported and even worked with the actress since their split. In 2011, he and Hicks attended the Los Angeles premiere of In the Land of Blood and Honey, the first feature film Jolie directed. In 2007, the actor appeared in her overall directorial debut, the documentary A Place in Time, which shows her celebrity friends visiting orphanages and refugee camps around the world.

Jolie and Miller began a romance while filming the cult movie Hackers, in which they played antagonizing love interests and elite hackers Crash Override and Acid Burn. They ended their relationship after the film wrapped, then later got back together.

They wed in 1996 in a small civil ceremony attended only her mother and his best friend, The New York Times reported, adding that Miller wore black leather and the bride donned black rubber pants and a white shirt with the groom’s name written in her blood, which she drew herself with a clean surgical needle, across the back.

“It’s your husband,” Jolie answered, when asked why. “You’re about to marry him. You can sacrifice a little to make it really special.”

In 1997, about 18 months after they wed, Jolie and Miller split. She filed for divorce in 1999. After it was finalized, the actress married Billy Bob Thornton in Las Vegas in 2000. The latter two also famously wore pendants containing drops of each other’s blood during their relationship, which was short-lived as well. Jolie filed for divorce in 2002 after two years of marriage and it was finalized in 2003.