Govt not to hand over development schemes to corrupt PPP rulers: Haleem Adil 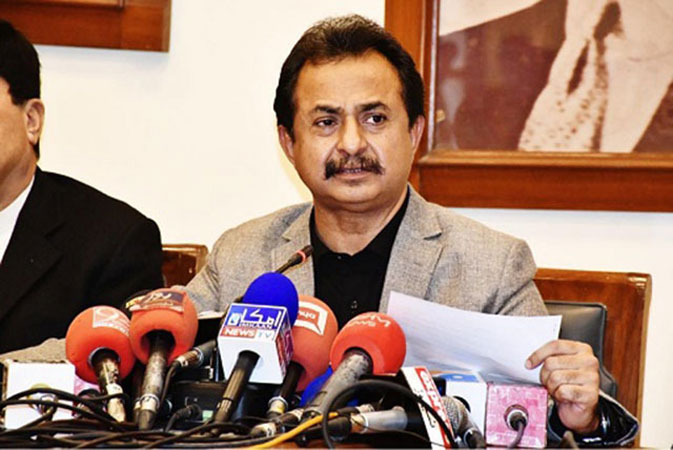 Pakistan Tehreek-e-Insaf (PTI) Central Vice President Haleem Adil Sheikh has said that Imran Khan-led federal government instead of handing over the development schemes to corrupt PPP rulers in Sindh would rather allocate the schemes to the people of the provinces.

Talking to media persons during a news conference along with party lawmakers and leaders in the premises of Sindh Assembly on Wednesday, he said that the Chief Minister Syed Murad Ali Shah had no concern or interest with the chronic issues of Sindh but he was just keeping evil eyes on the public money to please his masters by committing the banditry on the funds meant for the various schemes and projects of Sindh.

Haleem Adil said that PPP leaders would soon lose their mental level once their corrupt practices were exposed, curbed and foiled. The rulers of Sindh just wanted to further push to ruin and destruction, he added.

The federal government had provided all the required vaccines against the corona-virus while the provincial government had done nothing, he said adding that PM Imran Khan’s government had disbursed billions among the poor people of Sindh through Ehsas kifalat Program. The opposition leader in Sindh Assembly said that the PPP government had committed the massive malpractices in Benazir Bhutto Income Support Program and its former chairperson had gone absconding after inquiry was ordered against her for on the graft charges a few days back.

He said that chief minister Syed Murad Ali Shah in fit of desperation leveled baseless allegations against the federal government adding that the CM should avoid fomenting the ethnic hatred and fanaticism to conceal their corruption and incompetence.

Haleem Adil chided Mr Shah for his comments and threats against the federation and observed that they were not afraid of his such statements. He said that the Sindh Card which was badly misused by PPP leadership, now stood discarded.

The PTI Vice President said that when the lawlessness was on the peak, people were kidnapped and cops were being killed, they staged a drama about the water crisis in Sindh. He said that water situations were fast improving in all three barrages of the province, He said that the Sindh government, according to their own documents got Rs 1,650 billion and spent around Rs 8 hundred billion adding the same document revealed that 44 percent were misappropriated by the rulers. He said that PPP rulers had to be responsible for the massive corrupt practices they had committed during their 13 years of rule. He said that it was illogical and childish and to term SIDCL as East India Company when it was launched and inaugurated by the then prime minister Mohammad Nawaz Sharif and Syed Murad Shah along with the then chief minister, Syed Qaim Ali Shah, had attended that event.

Haleem Adil wondered why the chief minister yelled and wailed over completion of different welfare projects, which were carried out by the federal government in Badin, Karachi, Shikarpur and other districts on the requests of PTI leaders and their allies.