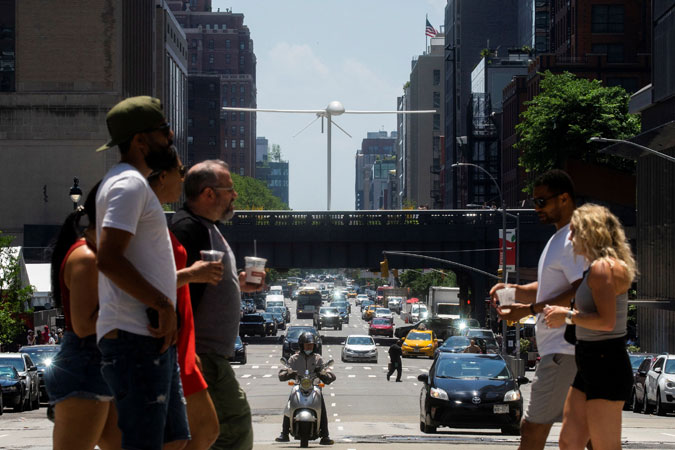 A giant, white sculpture of a drone has appeared 25 feet over Manhattan’s High Line park, unnerving New Yorkers – which was the creators’ intention. Sam Durant, the artist behind the fiberglass “Untitled,” said the work was designed to “remind the public that drones and surveillance are a tragic and pervasive presence in the daily lives of many living outside – and within – the United States.” The white sculpture of the predator drone stands out against the blue summer skies, appearing to hover over 10th Avenue, and rotating on its pole when pushed by the wind. “What we want to do with High Line Art is to bring to the public not just beautiful artworks, but also thought-provoking artworks that can generate conversations,” said Cecilia Alemani, chief curator of High Line Art, which sponsored Durant’s work. California resident Ariella Figueroa said the drone made her think about the future. “It’s the same technology that we were using in Iraq and Afghanistan 10, 12 years ago that is now handheld and anyone can buy,” said Figueroa.