Pakistan decries killing of family in Islamophobic attack in Canada 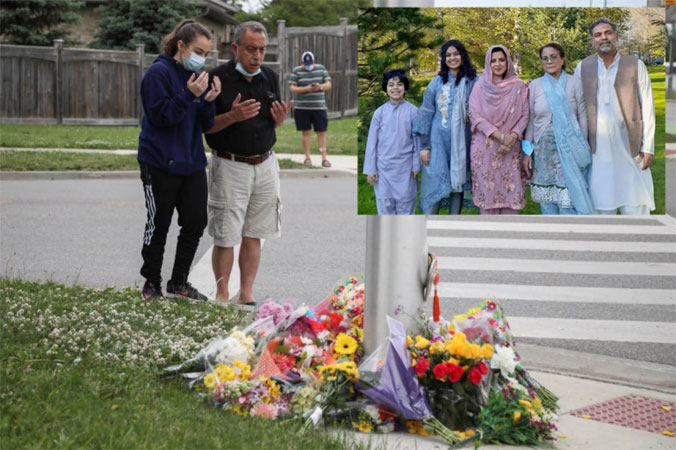 Pakistan on Tuesday strongly condemned the killing of a Pakistan-origin family in Canada, saying the tragic incident is yet another manifestation of the systematic rise in Islamophobia.

A man driving a pickup truck rammed into and killed four members of a Muslim family in the south of Canada’s Ontario province, in what police said was a ‘premeditated’ attack. The victims included a 74-year-old woman, a 46-year-old man, a 44-year-old woman and a 15-year-old girl – together representing three generations of the same family. A nine-year-old boy was also hospitalised following the attack and is recovering.

Calling it a “condemnable act of terrorism”, Prime Minister Imran Khan said the incident revealed growing Islamophobia in Western countries. “Islamophobia needs to be countered holistically by the international community,” he said.

Foreign Minister Shah Mahmood Qureshi said three generations of Pakistani-Canadians were killed in a “brutal act of mass murder for their Muslim faith”. “This is an act of terror rooted in unspeakable hatred and Islamophobia. Extend our deepest sympathy to the family members and pray for recovery of the only survivor; a little boy,” he said.

Foreign Office spokesperson said such incidents reinforced the imperative for the international community to work together for interfaith harmony and peaceful coexistence. “We strongly condemn the Islamophobic incident that resulted in the tragic death of four family members of Pakistani origin, in London, Ontario. Our thoughts and prayers are with the victims and their families,” Zahid Hafeez Chaudhri said.

He said Pakistan’s High Commission in Ottawa and the Consulate General in Toronto are in close contact with the relevant Canadian authorities to ascertain the facts of the case and to ensure that the perpetrators of this heinous act were brought to justice. “Our consul general in Toronto also visited the family of the deceased to offer sympathies and condolences and all possible assistance,” he said.

UN Secretary-GeneraI Antonio Guterres Tuesday expressed his outrage over the targeted killing of a Pakistani-origin Muslim family, and called for unitedly standing against Islamophobia. “I am appalled by the targeted and heinous attack on a Muslim family in Ontario, Canada,” the UN chief wrote on the Twitter. “My heart goes out to the victims, surviving family and loved ones – and the community,” he said.

Canadian Prime Minister Justin Trudeau on Tuesday labelled as a ‘terrorist attack’ the killing of four members of a Muslim family, who were run down by a man driving a pick-up truck. “This killing was no accident. This was a terrorist attack, motivated by hatred, in the heart of one of our communities,” Trudeau said during a speech at the House of Commons.