* Punjab Governor met over 100 politicians and Senators during US visit
* Sikh community of US all praise for Kartarpur Corridor: Ch Sarwar 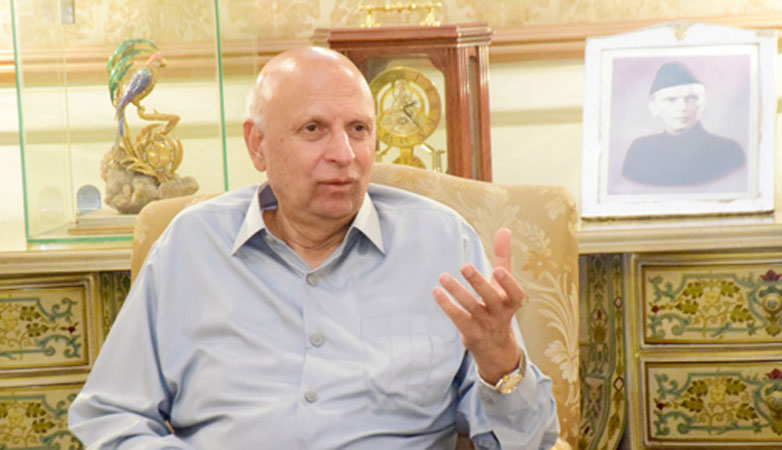 Punjab Governor Chaudhry Mohammad Sarwar has said that he had successful meetings with more than 100 politicians and other dignitaries including members of Congress, Senators, Governors and various Mayors during his recent visit to the USA. The bill to declare Punjab and California as sister states was tabled in the California Assembly in his presence, and a historic agreement was also signed between the Agricultural University of Faisalabad, and the University of California. Pakistan is highlighting Kashmir and Palestine issues on all international forums, adding that Pakistan’s efforts for the war on terror are being acknowledged across the world. Prime Minister Imran Khan and his team have saved Pakistan from economic bankruptcy. Jehangir Khan Tareen Group and its members will support PTI government on every matter including Provincial and Federal budgets. He said this while talking to a group of journalists at Governor’s House Lahore on Monday.

Governor Punjab Chaudhry Mohammad Sarwar said that during his visit to the United States, he met with the US officials and apprised them about Pakistan’s role in the Afghan peace process, under the leadership of Prime Minister Imran Khan, along with Pakistan’s initiatives to combat the climate crisis and Pakistan’s handling of the Corona virus pandemic, adding that he is glad that the USA is finally acknowledging Pakistan’s efforts for regional peace and stability. Governor Punjab said that he had successful meeting with US Senator Chris Van Hallen who has tabled the economic package bill for Pakistan. He is hopeful that he will be able to pass the bill along with other senators.

Governor Punjab said that India has always been involved in negative propaganda about Pakistan in the world, but ever since Prime Minister Imran Khan has come to power, Pakistan has emerged successful on the diplomatic front. Pakistan’s narrative is now being heard in the world and its efforts for regional peace, especially for the Afghan peace process, is being appreciated by the world, he added. Chaudhry Mohammad Sarwar said that after the recent terrorism of Israel against the Palestinians, the voice of Palestinians is being heard all over the world including the US, and the international community must stop turning a blind eye to Israel’s war crimes and immediately act to stop the genocide of innocent Palestinians. The inhumane and illegal 672 days long curfew in Kashmir is also a gross violation of international law and the United States as well as the other peaceful nations must play a role in resolving Kashmir and Palestine issues.

Replying to a question, Governor Punjab Chaudhry Mohammad Sarwar said that Pakistani and Indian Sikh communities in the United States are on the same page and the Sikh community has always stood by Pakistan’s stance on issues like Kashmir. “I have urged overseas Pakistanis to participate in the politics of the United States, and I am pleased to see that after I became the first Muslim Member of Parliament in the UK, this number is now in the dozens. Now, I hope that the Muslims Pakistani will also join politics in US,” he said.

He further said that the Sikh community is grateful to Prime Minister Imran Khan for opening the Kartarpur corridor and provision of facilities to Sikh pilgrims in Pakistan.

Governor of Punjab said that MoU has been signed between the University of California and the University of Agriculture, Faisalabad. Both universities will collaborate in agricultural research to enhance productivity and the sister states status of Punjab and California will usher in new era of development in Punjab, he added.