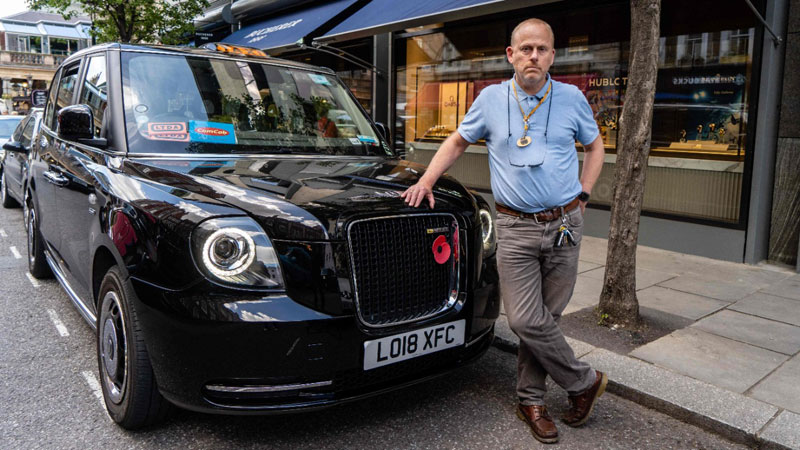 Barry Ivens, who has been driving London’s iconic black taxi cabs for a quarter of a century, has never experienced anything like the past tumultuous year in the British capital.

As waves of coronavirus swept the country and lockdowns wrought havoc on his industry, the 53-year-old said the financial and mental anguish had “taken its toll”. “It’s been really hard,” Ivens told AFP from behind the wheel, as he plied the still-quiet streets of central London looking for customers. He has relied on everything from repayment holidays on his mortgage and cab to government financial support schemes, and feels lucky to be alive given Covid-19 has caused nearly 128,000 deaths in Britain.

However, Ivens — one of 15 members of Black Taxi Tour London, a collective offering bespoke guided tours alongside regular rides — has also sorely missed the social side of his work. “You’re almost a showman for London,” he said. “You miss that all the time, so your mental health has really gone through it.

“All I keep thinking is: I’m still here, I’m still driving the cab, my family’s alright, let’s keep going. “It’s like the wartime attitude that my nan (grandmother) used to have.”

As Britain gradually eases its restrictions and customers slowly return, London’s thousands of cabbies are praying the worst is finally behind them.

Ivens believes business is back at around two-thirds of pre-pandemic levels, but notes that is barely sustainable. “That’s my profit margin — that top one-third pays for life, basically,” he said. Steve McNamara, of the Licensed Taxi Drivers’ Association (LTDA), said the industry is “hopeful” and can see “the green shoots”. But drivers have drained any savings to survive the past year, he said.

“Any slack’s gone,” he added. “And any slack’s gone for (Prime Minister) Boris (Johnson) as well. If he tries to lock us down again, I think he’s going to be looking for a different job.” Official statistics show the number of black cab licences dropped nearly 5,000 over the past year, to around 13,700. Newspaper pictures published worldwide last year showed a sea of abandoned cabs parked up in a field east of London.

“A lot of guys have scrapped vehicles, sold vehicles, de-licensed vehicles,” McNamara said. “We’ve heard awful stories: vehicles being repossessed, bailiffs knocking at doors.” The figures are fuelling fears of a future shortfall in cabs if the return to normality proceeds as planned. “As and when things start to pick up eventually, and I think that’ll be September… there’s going to be a massive shortage of cabs, undoubtedly,” McNamara added.

But some drivers worry that work-from-home arrangements could be largely here to stay.