Tareen Group MPAs slams Govt over FIR against its lawmaker

* MPA threatens ‘house will collapse if we leave it’ 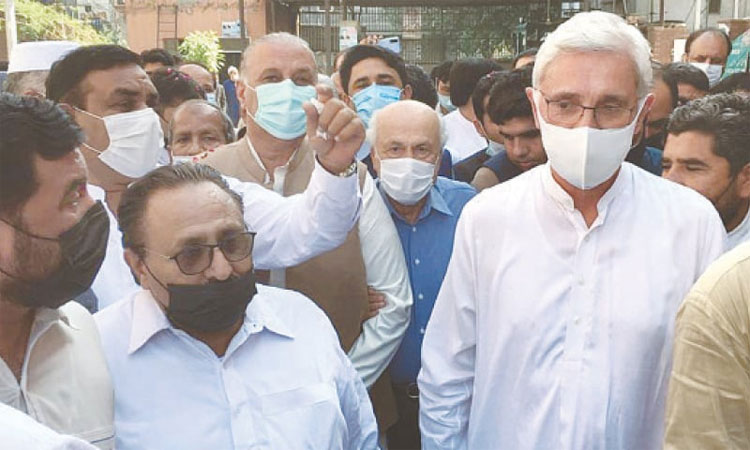 Yet another session of Punjab Assembly was marred by ruckus on Wednesday, as MPAs of Jahangir Khan Tareen group lashed out at the government in Punjab Assembly over an FIR that was launched against one of the members of the group-MPA Nazir Chohan by none other than, the Advisor to Prime Minister on Interior and Accountability Mirza Shehzad Akbar.

The parliamentary leader of Tareen Group in Punjab Assembly MPA Saeed Akbar Niwani, while criticizing the government at the floor of the house, even declared that this House will collapse if the support of his likeminded MPAs is withdrawn.

Some harsh views were also exchanged between the MPAs of Tareen Goup and Law Minister Raja Basharat. The issue started when a PML-N MPA Pir Ashraf Rasool condemned the FIR launched against PTI’s MPA Nazir Chohan on the direction of Mirza Shehzad Akbar.

“Nazir Chohan raised a valid question when he said that he had doubts over the belief of Shehzad Akbar regarding the finality of prophethood. An FIR was launched against the MPA instead of seeking clarification from Mirza Akbar,” said MPA Pir Ashraf Rasool.

Slogans were chanted in the House from the opposition benches in favor of the finality of the Holy Prophet (PBUH). Panel of Chairman Mian Shafi gave floor to Nazir Chohan who once again questioned the belief of Shehzad Akbar regarding the finality of prophethood.

“I came to know that Mirza Shehzad Akbar is a Non-Muslim Qadyani and my voters asked me to raise the issue with the government that why such important roles are given to Non-Muslims in Pakistan,” said MPA Nazir Chohan. I raised the issue on a TV program and then an FIR was launched against me after 10 days in Lahore instead of seeking clarification from Shehzad Akbar, the MPA of Tareen group said.

The FIR was launched on the behest of Shehzad Akbar who pressured the police despite the fact that the Chief Minister was against this FIR, he added. He questioned why an FIR was launched against an elected representative on the direction of a non-elected member. He further added that he went to his ancestral area in Gujjar Khan to investigate his beliefs regarding the finality of prophethood following which his doubt was later strengthened. MPA Nazir Chohan asked the Chair to constitute a committee of the House to ascertain his faith regarding the finality of the Holy Prophet (PBUH).

The issue irked the Law Minister Raja Basharat who said that no one has a right to question the faith and belief of anyone as it is against the Islamic injunctions. “I know the family of Shehzad Akbar for the last 40 years and his family regularly visits shrines and mosques,” said Raja Basharat. This House doesn’t have any mandate to question the faith of anyone, Basharat said.

He went on to say that the MPA has raised doubts on the Prime Minister as well who made Shehzad Akbar as his advisor. “If you have doubts about the Prime Minister too then you don’t have any moral right to sit in this House,” Law Minister roared. He challenged Chohan to bring two witnesses from Gujar Khan against Shehzad Akbar then he will also agree with him regarding his faith.

The remarks of the Law Minister provoked the parliamentary leader of Tareen Group MPA Saeed Akbar Niwani who also criticized the government over the issue. “Don’t dare us to leave this House. It will collapse if we leave it,” said Niwani. It is our right to criticize the policies of the government and we’ll keep using this right. He questioned the need to launch an FIR against Nazir Chohan while terming it an unwise decision. No MPA can be de-seated if he criticizes the policies of the government, he said.

The Panel of Chairman Mian Shafi Muhammad asked the Law Minister to sort out the issue of the FIR against Chohan.

Earlier, the session started after a delay of more than two hours from its scheduled time with Mian Shafi in the chair. Answers related to the Local Government were given in the question-hour.