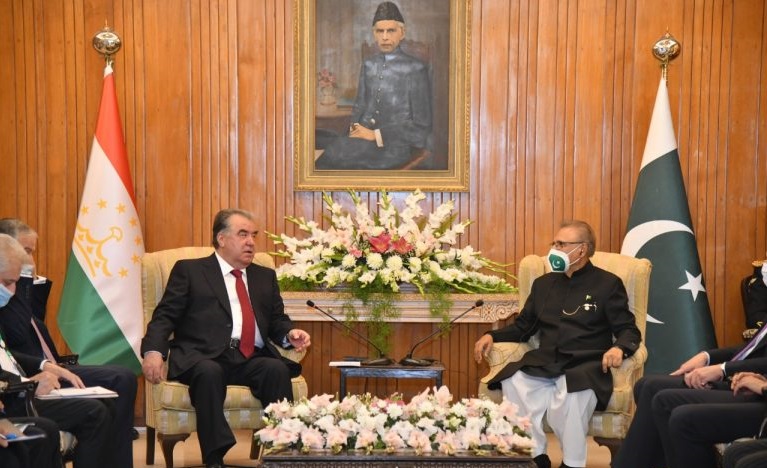 ISLAMABAD: President Dr Arif Alvi on Wednesday said that Pakistan attached great importance to its relations with Tajikistan based on strong historic, religious and cultural links and stressed upon further cooperation in diverse fields.

Talking to Tajikistan President Emomali Rahmon, who called on him at the Aiwan-e-Sadr, he said that Pakistan and Tajikistan had considerable scope of cooperation in the areas of trade, economy, culture, education and defence which needed to be further strengthened.

He underlined that Pakistan’s main emphasis had shifted from geo-politics to geo-economics and was focusing on optimally utilizing its location in this context. He underscored that the trade authorities and business communities of the two countries needed to collaborate effectively to enhance the volume of existing bilateral trade.

He also emphasised the importance of the early completion of flagship CASA-1000 transmission line project. He stressed that Central Asia was an area of special focus for Pakistan, especially for regional connectivity and integration. In this context, he stressed the importance of peace and stability in Afghanistan achieved through a negotiated political solution.

Dr Arif Alvi also briefed the Tajik president about the COVID-19 situation in Pakistan, saying the successful policy of the government led to containing the disease. He expressed the hope that this visit would further strengthen the excellent bilateral relations between the two brotherly countries.

He said that it was heartening that both sides adopted a joint declaration and had signed a number of agreements today, after the delegation-level talks. Both the sides reaffirmed the resolve to make coordinated efforts to promote peace and stability in Afghanistan as a stable and peaceful Afghanistan was essential for the materialization of energy and economic projects between the two countries.

He congratulated the Tajik president on successfully organizing the ninth ministerial conference of Heart of Asia-Istanbul Process in Dushanbe in March 2021. He also appreciated that a high-level parliamentary delegation from Tajikistan was participating in the second general conference of the Parliamentary Assembly of Economic Cooperation Organization in Islamabad from May 31 to June 3, 2021.

He thanked the government of Pakistan for extending a warm welcome and hospitality to him and the members of his delegation. He also invited his Pakistani counterpart to visit Tajikistan.