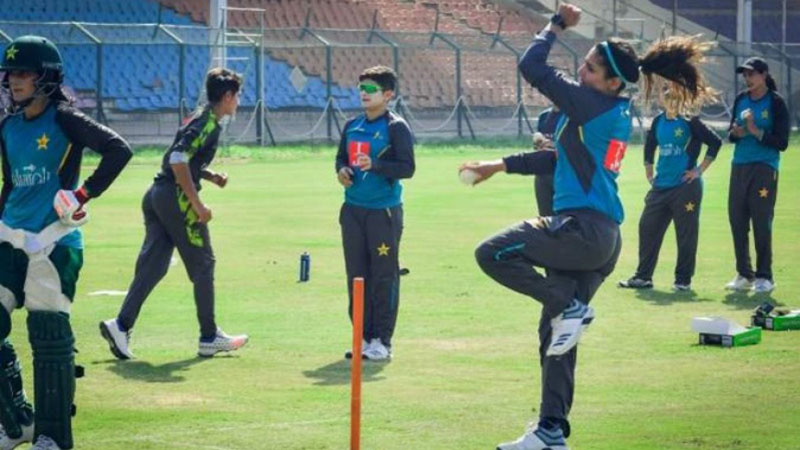 LAHORE: Pakistan women cricketers training camp commences in extreme heat in Multan on Monday (today). Over the next three weeks days, Multan will experience temperatures hovering well over 40 degrees, with a predicted high of 44 degrees. 26 Pakistan women cricketers will train in these extreme conditions till June 22, as part of the team’s preparations for the 50-over Women’s World Cup Qualifier that is scheduled to take place in Sri Lanka in December. While acknowledging the severity of the conditions, the Pakistan Cricket Board (PCB) said it had few other options but to train in Multan, given numerous challenges including the need to prepare a bio-secure bubble in the time of the COVID-19 pandemic. Historically during the summer months, the PCB has mostly held its camps in the city of Abbottabad, which is located in the hilly Khyber-Pakhtunkhwa province and experiences relatively milder weather than the lower-altitude regions of the country where temperatures often rise above 45 degrees and occasionally touch 50 degrees. But the venue isn’t seen as being feasible for the creation of a bio-secure bubble.

Karachi could have been an option too, but the city is presently facing a surge in Covid-19 cases, while grounds in Central Punjab, according to Urooj Mumtaz, the chair of the PCB’s women’s selection committee, are presently undergoing repair work. “Each venue had its own challenges around the pandemic,” Mumtaz said. “Multan was the only feasible facility available as a package. It has the ground, gym, and accommodation within one block, and it’s easy to maintain the bio-secure bubble there. But we are conscious and mindful of the extreme weather conditions, and that is why we have scheduled the training sessions to avoid the hottest part of the day. We are starting early in the morning and ending by midday, giving them ample rest in the day, and we’ll start again in the evening.”

After the camp concludes, Pakistan women cricketers could return to action after a five-month gap. The PCB and Sri Lanka Cricket (SLC) are in talks for a potential series in Sri Lanka in July. Pakistan women team’s last international fixture was in Zimbabwe, where they won the first ODI before the remainder of the series was cancelled when Emirates Airlines, the Pakistan team’s carrier, announced it would suspend its operations in the Harare-Dubai route eight days before their scheduled departure. Before that, Pakistan women had toured South Africa, where they lost the ODI series 3-0, and won the third and final T20I to deny the hosts another series sweep. Since the aborted Zimbabwe tour, Pakistan women haven’t played any international cricket, but a group of 26 players underwent a skills and fitness camp in Karachi, similar to the one that is being organised in Multan. The Multan camp has started in a bio-secure environment.