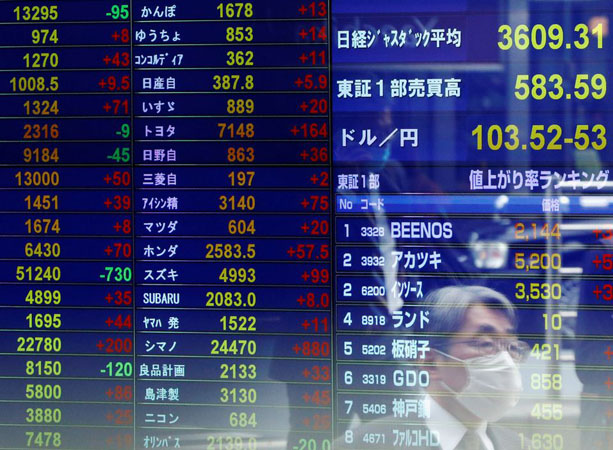 Asian share markets were mostly positive Tuesday as investors looked to signs of recovery from the coronavirus pandemic as major economies around the world reopen.

MSCI’s broadest index of Asia-Pacific shares outside Japan was just 0.13% higher in the the Asian afternoon session in trading thinned by holidays in China and Japan. Hong Kong’s Hang Seng Index was trading 0.33% higher at 28,441.95.

In a statement, the bank signalled the cash rate would stay ultra low until least 2024 and upgraded its growth forecast for the Australian economy from 3.5% to 4.75% over 2021. read more

In early futures trade, FTSE Index was pointing to a 0.3% gain at the open, Eurostoxx 50 futures were flat and S&P 500 futures indicated a 0.24% decline for the US.

The mildly positive tone in Asia was broadly in line with that on Wall Street overnight, where upbeat earnings, news of cities reopening and a dovish Federal Reserve helped offset a disappointing report on manufacturing activity.

While that combination is also causing investors to position for stocks to defy the customary ‘Sell in May’ adage, they have turned cautious ahead of key U.S. services data due on Wednesday and non-farm payrolls numbers on Friday.

“Dovish tones from the Fed and an extraordinary fiscal stimulus from the Biden Administration are fuelling optimism that the U.S. economy will strengthen further during 2021,” said Stephen Koukoulas, managing director at the Canberra-based Market Economics.

“Attention is also moving the U.S. payrolls data this Friday where close to 1 million new payrolls and an unemployment rate back down towards 5.6% is set to reinforce this upbeat sentiment.”

Taiwan was an exception in the Asian region, with stocks there down by 1.7% after initially falling by up to 3.3% earlier in the day. The index is up about 15% for the year, which ranks it as one of the strongest performing markets in the region.

In Hong Kong, the Hang Seng’s positive performance on Tuesday came after the index shed nearly 1000 points over the past two sessions. “The ‘Sell in May’ story is taking place in Hong Kong, we are not seeing investors chasing the market,” Jack Siu, Credit Suisse’s greater China chief investment officer said.

“For the new economy stocks, there is a lack of interest because there are concerns about what the new regulations will be and what impact that will have on those companies. Those uncertainties are putting investors on the sidelines.”

Japan and mainland China’s markets remained closed on Tuesday for holidays dampening trading volumes across the region. Monday’s session on Wall Street saw the Dow Jones Industrial Average end 0.7% higher at 34,113.23 points, while the S&P 500 gained 0.27% to 4,192.66 with most of the gains concentrated in industrial and commodity shares.

Energy stocks also gained on the back of higher oil prices.