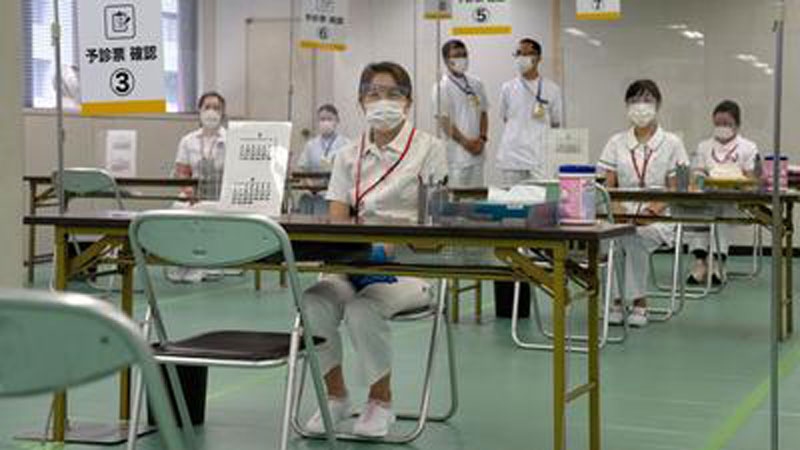 TOKYO: Japan opened its first mass vaccination centres on Monday in a bid to speed up a cautious Covid-19 inoculation programme with just two months until the virus-postponed Tokyo Olympics. The two military-run centres in Tokyo and Osaka will administer thousands of shots daily, initially to elderly residents of the cities, as the country battles a fourth wave of virus cases. Just two percent of Japan’s population of 125 million are fully vaccinated so far –– compared to around 40 percent in the United States and 15 percent in France.

Criticism has been mounting over the relatively slow rollout, hindered by strict medical rules and complex bureaucracy, but the first people to get a jab at the Tokyo centre said they were excited to move on with their lives. “It’s wonderful. I can rest easy now. For a long time, a year and a half, I was feeling rather anxious and tense,” Hideo Ishikawa, 73, told reporters. Munemitsu Watanabe, a 71-year-old engineering lecturer, also expressed relief but said the rollout could have been quicker. “Had they done it earlier and had 80 or 90 percent of people injected by the time of the Olympics, then the Games could be held more smoothly,” he said.

The Tokyo centre aims to deliver up to 10,000 jabs a day, while the Osaka centre will give up to 5,000. Both are using the two-shot Moderna vaccine, which was approved for use in Japan on Friday along with the AstraZeneca formula. But the AstraZeneca vaccine will not be used immediately due to concern over very rare blood clots. Japan began giving the Pfizer jab in February first to medical workers and then over-65s, who the government aims to finish inoculating by late July, when the Olympics begin.

But ministers insist the Games do not figure on their rollout schedule, and no date has been announced for other age groups. Japan has seen a relatively small coronavirus outbreak, with around 12,000 deaths overall, but a recent surge in infections has put hospitals under strain. Tokyo, Osaka and eight other regions are under a virus state of emergency curbing commercial activities until the end of May, with reports saying the measures could be extended for another three weeks. Public opinion is largely opposed to holding the Olympics this summer but organisers insist the event can be held safely. The majority of athletes and others staying in the Olympic village will be vaccinated before they enter Japan, but inoculation is not required to participate.