Ch Nisar not allowed to take oath as MPA 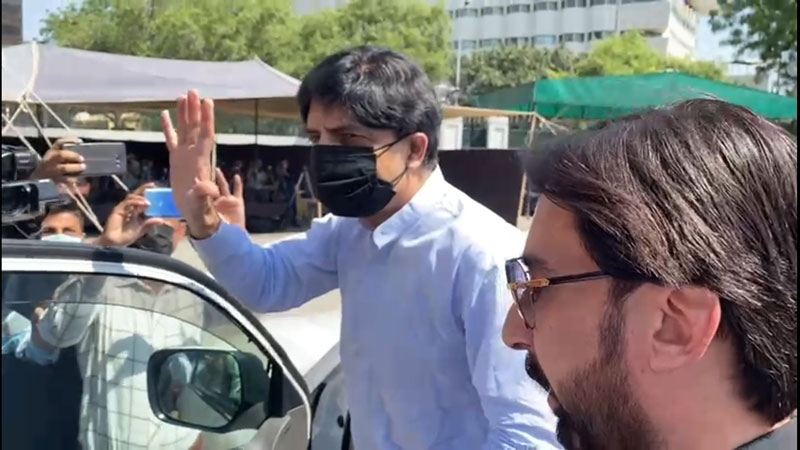 Former interior minister Chaudhry Nisar Ali Khan was not allowed to take oath as MPA by the Punjab Assembly secretariat on Monday.

The estranged PML-N leader came to Punjab Assembly to take oath as MPA three years after being elected to the house but he was told by the assembly secretariat that he cannot take oath due to the absence of both the speaker and deputy speaker – a reason that senior politician from Chakri rejected while talking to media later.

“I had intimated both the Election Commission of Pakistan and Punjab Assembly regarding my oath three weeks ago but I haven’t been allowed to take oath on the pretext of absence of speaker and deputy speaker,” said Ch Nisar, while speaking to media outside the Punjab Assembly. “The Panel of Chairman exercises the same powers as enjoyed by the speaker when he is in the chair but the assembly secretariat didn’t allow me to take oath,” he said, and announced to take the matter to court after consultation with his legal time.

Ch Nisar kept waiting in the office of the speaker for an hour before leaving the Punjab Assembly premises.

Taking to media, he further said the country needs the politics of reconciliation instead of confrontation. “Believe me, I am not part of any political game,” he responded, when asked about rumours circulating in media regarding his upcoming role in the political system.

The decision of Ch Nisar to take oath after three years came in the wake of reports that the federal government is set to promulgate an ordinance within days, de-seating those members of elected houses who haven’t taken oath of their respective offices within a stipulated time.

Taking about the issue, Secretary Punjab Assembly Muhammad Khan Bhatti said, “We didn’t refuse him from taking oath. There are three petitions pending in Lahore High Court Rawalpindi bench while two in LHC Lahore bench against him. We are unaware of their latest status. We’ll allow him to take oath after getting current status of those petitions,” he said.

Law and Parliamentary Affairs Minister Raja Basharat also shared the same views as he said that Ch Nisar’s oath will be decided after taking latest information about the petitions pending before the court.

Meanwhile, the session of Punjab Assembly started around two hours beyond the schedule, under the chair of Panel of Chairman Abdullah Warriach.

During the general discussion on agriculture, PML-N MPA Sardar Awais Laghari said that due to stubbornness of the government, chairman of the public accounts committee has not been elected yet. He alleged that government has not restored local government in Punjab despite Supreme Court’s orders. He said that the agriculture sector is continuously facing losses. “We have not introduced new varieties in sugarcane since 1960s. The farmers get good rates not because of sugar mills but due to demand and supply gap,” he added. Agriculture Minister Hussain Jahanian Gardezi said that government is taking steps for bringing improvement in agriculture sector. “The government announced agriculture policy in 2020.