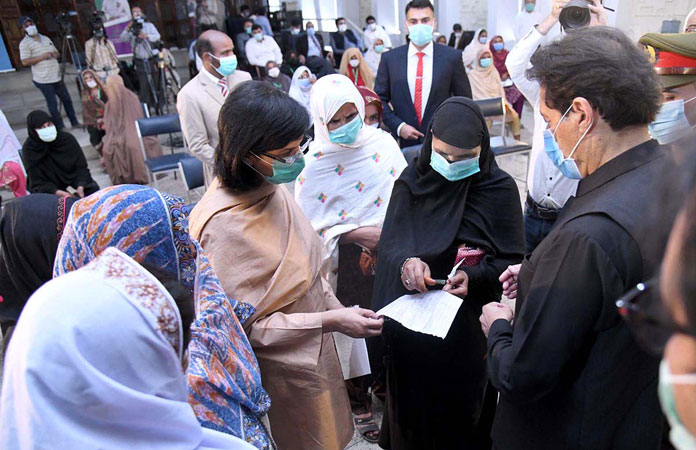 Prime Minister Imran Khan has said that financial inclusion of women will help bring them into the mainstream and reduce poverty faster in the country.

The prime minister said this on Monday while launching the Ehsaas Saving Wallets (Ehsaas Bachat Bank Account) Initiative, which is aimed at financial and digital inclusion of women.

The Prime Minister termed the initiative a very significant programme, saying through Ehsaas Bachat Bank Account, the women will be able to better utilise the cash assistance being given to them under the Ehsaas Programme. He was confident that like other programmes of Ehsaas, this will also prove to be a success. Khan pointed out that Ehsaas Cash Emergency programme has been ranked amongst top four social protection interventions by the World Bank (WB), saying, “I praise Ehsaas programme for making it possible.” He said in the wake of Covid-19, cash assistance was delivered to the deserving families in the most transparent and apolitical manner. He said if timely assistance was not delivered, the situation arising out of the pandemic would have added to the woes of the poor lot.

The prime minister noted that no nation can become great until and unless it takes care of the poor people. “We are making efforts to help such segments in the society and take steps for their welfare,” said the PM. He, once again, expressed the commitment to uplift the weak segments of the society as per the principles of the State of Medina.

On the occasion, Special Assistant on Poverty Alleviation Dr Sania Nishtar briefed the prime minister about the Ehsaas Saving Wallets. Under this programme, Ehsaas Kafalat beneficiaries will have the option of either drawing their money or saving money into the digital wallets.

The beneficiaries of the Kafalat programme can open these accounts at agent shops or ATMs. Initial transactions through these accounts will include balance inquiry, cash in and cash out, transfer funds received from Ehsaas to mobile accounts, mobile top up, utility bill payments and money transfers.

In her remarks, Dr Sania Nishtar said the social safety net will be further expanded and one window facility will be opened at Tehsil level to integrate all Ehsaas programs under one roof. She said the first one window facility will soon be opened in Islamabad. She said Ehsaas Saving Wallets will prove to be an important milestone for the economic empowerment of women. She said this programme has been framed keeping in view the best international practices.

rime Minister Imran Khan has said the journey to the system of the State of Medina is a constant struggle in which the role of all sections of society, including religious leaders, is important.

The prime minister was talking to the Chairman Council of Islamic Ideology (CII) Dr Qibla Ayaz and Council members who called on him on Monday.

Prime Minister Khan stressed the need for following the guiding principles of Islam to establish justice and get rid of corruption. He said that the core aim of his political struggle is to serve the poor by applying the principles of the state of Medina. He said after observing the West very closely, he has come to the conclusion that only by following the guiding principles of Islam and the Sunnah of the Prophet Hazrat Muhammad (PBUH), Pakistan can become a prosperous and developed country.

The chairman and members of Council of Islamic Ideology paid rich tributes to Prime Minister Imran Khan for his defence of the Holy Prophet (PBUH), his statement on Islamophobia, and his fight for the rights of Kashmir and the Palestinians.

Separately, the prime minister said that the National Accountability Bureau (NAB) has recovered Rs484 billion in the last three years (2018-2020) in contrast to Rs290 billion recovered during 1999-2017.

“When the government does not protect the criminals and lets investigation agencies and accountability work without interference, it shows in the results being achieved,” the premier remarked on Twitter.

On May 21, the country’s anti-graft body claimed to have recovered Rs23.85 billion in the fake bank accounts scam.

Meanwhile, Prime Minister Imran Khan has expressed grief and sorrow over the death of Liaquat Khan, the brother of Minister for Aviation Ghulam Sarwar Khan. In his condolence message, he prayed for the departed soul and commiserated with the bereaved family.