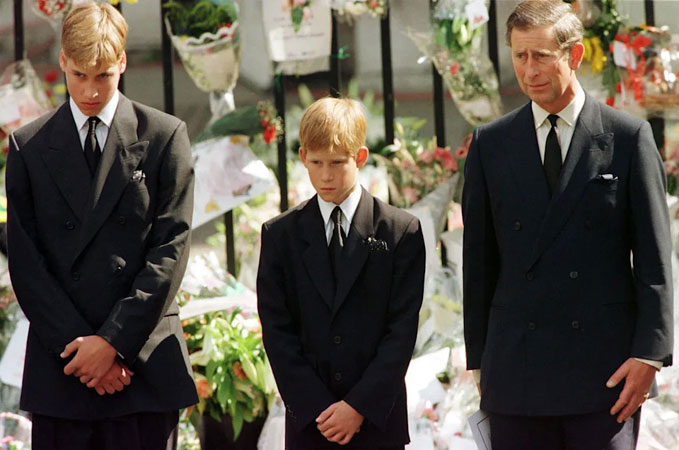 While criticism of Prince Harry is being flung fast and furiously, it’s not going to silence him — nor should it, says Oprah Winfrey.

An interview with Harry and Oprah about their new Apple TV+ series, The Me You Can’t See, ran on Friday’s Good Morning America, and in it, Harry said being candid about his life experience is part of his “healing process.” Their show sees the pair discussing mental health and emotional well-being, both their own — which has Harry in the headlines, as his relates to Princess Diana’s death and growing up in the royal family — and the journeys of others, including stars like Lady Gaga, Glenn Close and Robin Williams’s son Zak.

“Stigma thrives on silence,” Harry told GMA’s Robin Roberts of his decision to partner with Oprah to examine the issue. “So as long as it thrives on silence, the best that we can all do collectively is continue to talk and share stories that are so relatable to so many people around the world.”

Harry said an aha moment he had when making the series was interviewing Zak Williams, who had mental health issues from a young age that he used alcohol and drugs to mask. It led Zak to addiction — one that mirrored Robin’s own addiction — something he deemed “generational,” which made him want to break the cycle and not pass to his kids. (Robin died by suicide in 2014.)

“Zak’s story a classic example,” Harry said. “The sort of parallel thread between what happened with him at his age and what happened to me at my age. It’s remarkably similar,” referring to Diana’s death in 1997 when Harry was 12, and Harry’s later use of alcohol and drugs to mask his pain. “But there was one thing that he said in a follow-up conversation, which was: His service to others has helped heal him. And I think that was a really key moment for Oprah, myself and Zak … for us to go, ‘Wow, this, it’s true.'”

Harry said it’s been true for Oprah, who’s used her trauma to help others, also recently in her book, What Happened to You?: Conversations on Trauma, Resilience, and Healing. And Harry said “it’s been true for me in starting the Invictus Games, to be able to create something,” referring to the multi-national sporting event for wounded, injured and sick servicemen and women that he founded in 2014, “to watch other people heal is part of our own healing process.”

Oprah said she thinks Harry sharing his story can only help others. She said many people haven’t been able to “grieve properly,” particularly over the last year. “So I think hearing someone like Harry talk about” his struggles “allows other people to see themselves.”

And Oprah said Harry shouldn’t be silenced, despite was his critics may say. On Friday’s Today show, she dismissed criticism Harry and his wife, Meghan Markle, have faced for requesting privacy, as they build their new life in California, while also opening up about their lives through this series and in interviews.

“I think being able to have a life that you are not intruded upon by photographers or people flying overhead or invading your life is what every person wants and deserves,” Oprah said. “Privacy doesn’t mean silence.”

She continued, “Asking for privacy in your own personal life does not mean that you don’t want to also use your platform to help the world see itself differently.”

In the Apple TV+ show, Harry — who began therapy four years ago after beginning his relationship with his now-wife — delivers some real talk about his trauma. Seeing his mother being hounded by paparazzi as a child and being unable to help — and then losing her at 12 after her car, chases by paps, crashed. He said he spent his life trying not to think or talk about his mother because it caused so much pain. And no one around him, as he was raised by Prince Charles, was speaking about it either.

Harry said after Diana’s death, had his “head in the sand” and just tried to move on. “If people said, ‘How are you?’ I’d be like, ‘fine.’ Never happy. Never sad, just fine. Fine was the easy answer. But I was all over the place mentally.”

There was no encouragement from within the royal family to get help — because no one before him did.

“My father used to say to me, when I was younger, he used to say to both William and I, ‘Well, it was like that for me. So it’s going to be like that for you.’ That doesn’t make sense — just because you suffered it doesn’t mean that your kids have to suffer,” he said. “In fact, quite the opposite. If you suffered, do everything you can to make sure that whatever negative experiences that you had, that you can make it right for your kids.”

Harry said he had “panic attacks” and “severe anxiety” in his 20s when he would perform royal duties.

“Every single time I jump in the car and every single time I see a camera,” he said. “I would just start sweating.” He said he was often “freaking out” and it became a “nightmare time in my life” because he was always in “fight or flight mode.”

He earned a reputation for partying — and he said it was an escape from his pain.

He said the 10 years he spent in the Army were the “happiest time of life” because he was treated like a normal person. His relationship with Markle was what led him to start therapy.