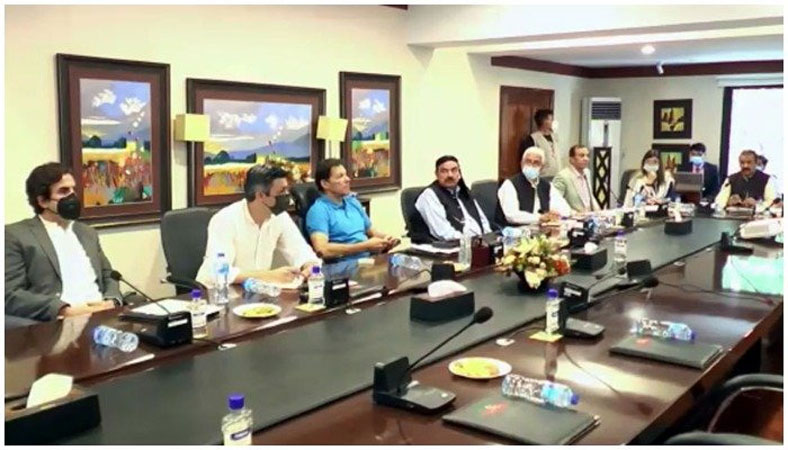 Prime Minister Imran Khan said while chairing a meeting of PTI’s core committee that nations could not survive for long without strong ideals and stressed that merit and transparency were the hallmark of his government.

The prime minister urged party officers and members to stick to PTI’s core ideology. The core committee said that PTI’s government had been facing different mafias. The objective behind establishment of PTI was to enforce rule of law and provision of justice to everyone. They resolved that the PTI government would go to every extent to achieve those goals.

The meeting also renewed the pledge that NRO would not be given to anyone belonging to any party.

Even if my government collapses, I will not compromise on accountability, sources quoted Prime Minister Imran Khan as saying. “My government will not be blackmailed at the hands of some pressure groups.”

He said the accountability will continue indiscriminately and across the board.

Separately, the core committee meeting deliberated over local bodies elections in Khyber Pakhtunkhwa and Punjab, the two provinces where PTI has its rule.

The meeting also said there will be no vengeance policy by the government, neither on the opposition parties nor on allies who dissent from the policies.

PM Khan said he never directed anyone to open a case on someone or prosecute someone based on his personal bias or to exact revenge on them.

Nobody should expect any concession on me, however, the PM said, adding that the law will mark its own trajectory for my allies and enemies both.

The prime minister also chaired a meeting to review progress of CPEC projects and the promotion of investment. He said CPEC would not only ensure economic prosperity of Pakistan but the path of entire regional development hinged over it.

During the meeting, the prime minister said that strategic partnership between Pakistan and China had been unmatched throughout the world.

For further strengthening of these ties into economic relations, he stressed upon promotion of bilateral investment in different sectors with provision of facilities to investors.

The meeting discussed in detail the investment under CPEC, facilities extended to the Chinese investors, related issues and the steps for their resolution.

The prime minister directed authorities concerned to take immediate steps to remove obstacles to the issuance of long-term visas to foreign investors, especially Chinese investors and ordered the introduction of a separate visa category for people associated with CPEC projects.

The premier said that all possible incentives should be provided to investors and directed the Home Ministry to submit a summary to the federal cabinet in this regard.

The Prime Minister directed the Board of Investment to formulate and present a detailed plan, with the consultation of the business community, for the promotion of foreign investment in specific sectors.