PTI, Tareen group decide to move forward as a ‘family’ 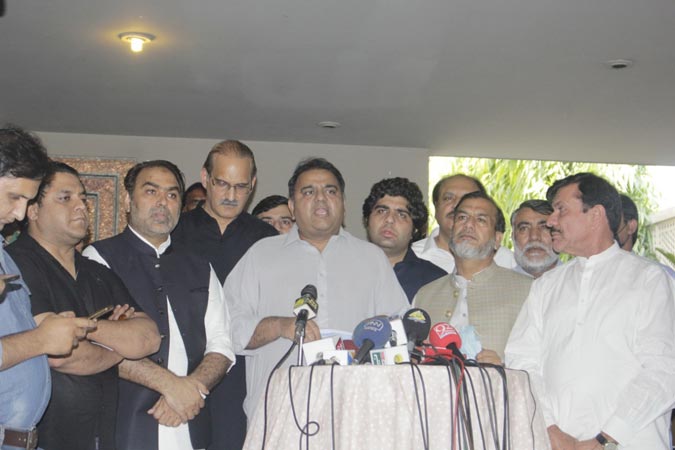 Federal Minister for Information and Broadcasting Chaudhry Fawad Hussain Saturday said there is no rift within the Pakistan Tehreek-i-Insaf (PTI), which is united under the leadership of Prime Minister Imran Khan.

Addressing a press conference in Lahore along with members of Jehangir Tareen group, the minister said the PTI and supporters of estranged PTI leader have decided to move forward as a ‘family’ and a united political party, adding that any personal or collective problems would be resolved through dialogue. “The PTI is a family. Misunderstanding among family members is a common thing, which is resolved through mutual consultations,” he said, and rejected the impression given by the opposition parties that there is any rift within the PTI. “Their dandia dance would hopefully come to an end now,” he added.

Fawad said during the meeting, he listened to the point of view of Jehangir Tareen’s allies in detail. “I have a close relationship with Nauman Langrial,” he said and stressed the need for improving coordination as the party issues can only be resolved through talks. “We all have decided to move forward as a family and a united party as is tradition. There is no issue of grouping in this or conflict between one another. We have decided that we will sit and have talks to solve any personal or collective problems. We are all united under [Prime Minister] Imran Khan’s leadership,” he said, adding that the delegation has also been tasked to solve the issues of the group in an ‘organisational manner’.

According to the information minister, the members of the Tareen group have “expressed confidence in Prime Minister Imran Khan’s leadership and they are proud of their relation with the PTI and these are the basic things which we are all united on”. He said issues sometimes arise on small matters or problems but on “big issues, all these people are clear that Imran Khan is their leader and PTI is their [political] party and there are no two opinions about it.”

The minister said the party leadership has already a clear stance on the Jehangir Tareen issue. “Neither Jahangir Tareen expects Prime Minister Imran Khan to give him any undue favour nor the latter will do so,” he said, adding that a committee has been formed under the leadership of Senator Ali Zafar on the Jahangir Tareen issue and its report is awaited. “This report will determine the internal line of the party,” he added

As far as the court cases are concerned, the minister said, they are legal matters, and made it clear that neither the prime minister has any policy on it nor he will do anything about it, and Jahangir Tareen will also not like any such thing. “We are all like a family and have decided to move together,” he said, adding the decision has been taken to resolve personal and collective issues amicably.

He vowed to work on the task given to him, Amir Kiyani and Saif Niazi in an efficient manner. He said the PTI is the only party, which had the representation in all the four provinces, and Imran Khan had a vote bank across the country. On the contrary, he said, the Pakistan Muslim League-Nawaz is the party of Central Punjab and Pakistan People’s Party that of interior Sindh.

He said elections were held on around 1,100 to 1,200 seats in the country and there was no party except the PTI to field candidates in all the constituencies. “We are proud to say that the PTI is a federal party,” he said, adding that minor things happen in a national-level party, which will be settled in a systematic way. “We will solve these issues.” To a question, he said that no development funds are being issued to any members of the national or provincial assemblies.