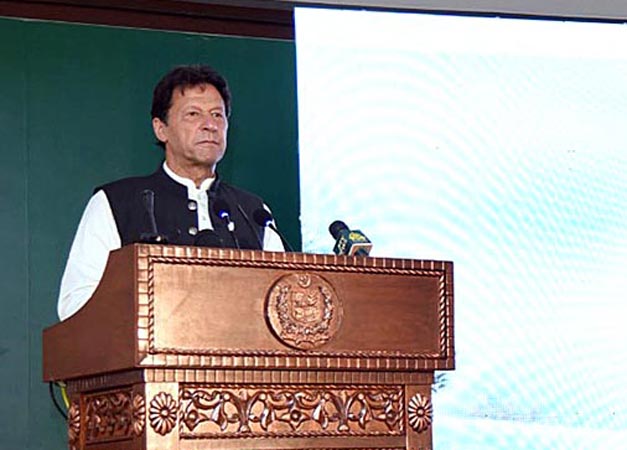 Prime Minister Imran Khan Thursday said on completion of his five-year term, he wants to see Pakistan a welfare state and a country with rule of law where mafias are held accountable.

“More than desiring the government’s failure, the opposition is scared of its success,” the prime minister said while addressing the groundbreaking ceremony of 103-kilometer Naukundi-Mashkhel Road of Balochistan. “Our political opponents and mafias want to topple our government because they are scared of our success,” he said. “Opponents are seeing their political death in my government’s success,” he added.

The prime minister, while recalling the 2018 general elections, said his opponents had predicted that Pakistan Tehreek-e-Insaf (PTI) would face defeat in the polls. “But we secured the two-thirds majority in Khyber-Pakhtunkhwa due to our performance and our opponents are wary of the same results in the upcoming elections at the national level,” he said. “The mafia is blackmailing me to get an NRO or else they will topple my government,” he said, without naming anyone. “All of you can see what their condition is today. They have the same fear here in all of Pakistan since our government came at the federal level. They’re all afraid now of us becoming successful hence they started making noise from the first day that the government has failed because it is their wish for failure [of the government] because they see their political death,” he added.

The prime minister recalled that during the 90s, Asif Zardari used to be put behind bar for corruption cases but he always came out whenever the Pakistan People’s Party came into power, which shows that the cases were closed just by using the influence. He said he wants to see all these big mafias being brought under the ambit of the law by the end of his government’s five years. He termed this struggle for the law as his first objective, saying his second goal is to lift Pakistan’s weak segments which has never been done before in the country.

The prime minister said that the PTI inherited the economic crisis from the previous government and the country would have gone defaulter if the government hadn’t paid the loan instalments. He said having inherited the biggest ever debt burden and fiscal deficit, the first year of his government was passed to ensure country’s financial survival and avert default. “During the second year, it faced the Covid-19 crisis, through the country was lucky to sail through it successfully by maintaining a balance between the lives and the livelihood, unlike the neighbouring country India,” he said, and hoped that the country would also overcome the third wave provided the people observed precautions particularly the use of masks.

Reiterating his government’s vision of uplifting the neglected areas, the prime minister committed that they would develop record number of roads in Balochistan during their five years’ term. He said a nation aspiring to make progress must achieve the uplift of its poor population and ensure rule of law just like China which steered 700 million people out of poverty and jailed over 400 ministerial level people for corruption.

The prime minister recounted his government’s welfare schemes and reforms like Sehat Insaf Card for entire population of Punjab and KP provinces, shelter homes, mobile kitchens to serve the residents of poor localities, uniform education curriculum and legal reforms to ensure disposal of property cases within a year. He said following the incentives by the government, the industrial sector was witnessing boom after five years.