Munir Akram says Israel has no business to be in East Jerusalem, other occupied territories 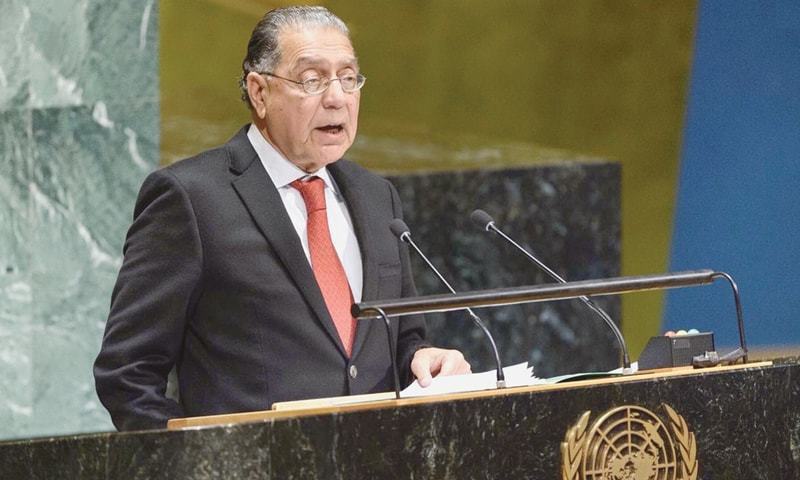 NEW YORK – Pakistan called on the Non-Aligned Movement (NAM) to demand an immediate end to Israel’s deadly offensive in Palestine when the 120-member body’s coordinating bureau met to discuss the horrendous situation in East Jerusalem and other occupied Palestinian territories.

At the same time, Ambassador Munir Akram cautioned the NAM members against succumbing to the rhetoric of the aggressor by drawing a moral or a military equivalence between a beleaguered and unarmed Palestinian people and one of the strongest militaries in the region.

“Our response has to be based on principles – principle of self-determination of peoples, principle of struggle against foreign occupation and aggression,” he said, while voicing solidarity with the Palestinians. “It is disturbing to hear attempts to draw an equivalence between aggression of Israelis and the defence of Palestinians,” he said in his remarks.

Regretting that the UN Security Council has been blocked by one state from issuing a ceasefire call, the Pakistani envoy called for stepped up efforts so that it (that state) lifts its veto on demanding a cessation of hostilities. The Non-Aligned Movement must work for the restoration of international legality and for seek a two-state solution to promote peace and stability in the region, he said.

“Let us base our position on the reality, on humanity, and not on considerations of power relationships,” Munir Akram said. Minister for Foreign Affairs Shah Mahmood Qureshi is tirelessly working day-and-night to arrange immediate but permanent peace for Palestine along with exposing Israel’s state terrorism in the Middle East region.