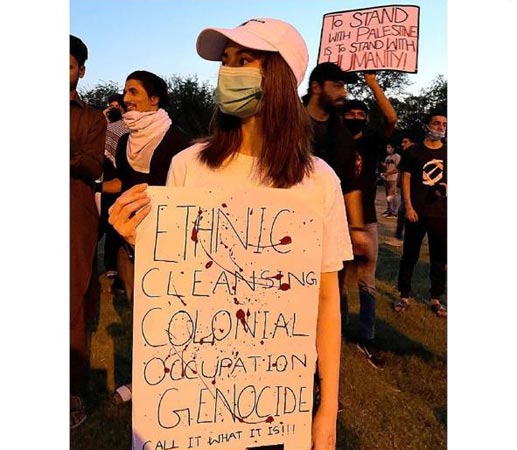 Pakistani starlet Hania Aamir is now among the handful of celebs raising their voice to spread more awareness about the situation in Palestine at the hands of the apartheid state of Israel.

Aamir shared a photo of a Palestinian flag on her Instagram late on Sunday, May 16, with the caption urging people to “Call it what it is.”

She also uploaded a video detailing her feelings about the plight of innocent Palestinians. “I feel helpless and I feel ashamed right now. I am ashamed of the fact that I’m sitting here leading a very comfortable life while there are people dying and being bombed,” said Aamir.

“They’re losing their loved ones, their homes, their families… and I am here posting Eid photos,” she added. “And I am ashamed that I posted anything other than what is happening in Palestine.”

Hania Aamir also mentioned that nobody could have the heart to not talk about Palestine, especially after consuming the content coming out of there.

“Talk about it,” she urged. “I am not saying that stop living your normal life, do whatever you’re doing but talk about this as well. One post a day, two posts a day, or just one hashtag or two hashtags a day on Twitter is not going to hurt your social media. ”

Hania Aamir went on to reiterate that no one deserves to live in constant fear, calling it a violation of “basic human rights.”

The situation in Gaza, Palestine has escalated over the past few days after Israel intensified its offensive against Palestinians, leaving more than 145 people dead.