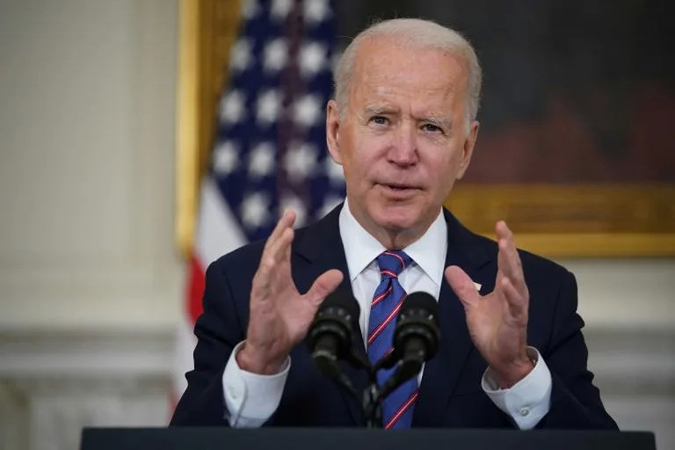 WASHINGTON: US President Joe Biden on Saturday expressed his “strong support” to Israel in a phone call with Prime Minister Netanyahu, saying that Israel had the right to “defend itself” against Hamas and other groups in the country.

The American president called Netanyahu and the Palestinian president, speaking to both as violence between Israel and Palestine continued, claiming the lives of more than 140 Palestinians.  Many among them are women and children.

Speaking on the sixth day of a paroxysm of Israeli violence that has targeted Palestinians and left scores dead or wounded in Gaza, Biden expressed his “strong support” for Israel’s “right to defend itself” against rocket attacks by “Hamas and other terrorist groups,” in his call with Netanyahu, while also emphasizing his clear concern over the deadly flare-up and casualties on both sides.

“He condemned these indiscriminate attacks against towns and cities across Israel,” the White House statement said. But Biden also raised concerns about the safety of journalists after Israeli air strikes on Saturday flattened a building in Gaza housing The Associated Press and other international media outlets.

In a phone call with AP president and CEO Gary Pruitt, Secretary of State Antony Blinken offered “unwavering support for independent journalists and media organizations around the world,” noting the “indispensability” of reporting in conflict zones, according to State Department spokesman Ned Price.

Biden, who up to now has said little publicly about the heightened violence, voiced US support for a negotiated two-state solution to the ongoing Israeli-Palestinian conflict. He made the same point in a separate phone call with president Abbas of the Palestinian Authority, the White House said, highlighting “strong commitment to a negotiated two-state solution as the best path to reach a just and lasting resolution of the Israeli-Palestinian conflict.”

The US leader, in his first call with Abbas since taking office, also “stressed the need for Hamas to cease firing rockets into Israel.” Defence Secretary Lloyd Austin “reaffirmed Israel’s right to defend itself,” in a phone call with his Israeli counterpart Benjamin Gantz, according to a readout.

Austin “strongly condemned the continued onslaught of attacks by Hamas and other terrorists groups targeting Israeli civilians,” it said, adding that the secretary had “shared his view on the need to restore calm.” Israel pummeled the Gaza Strip with air strikes on Saturday, killing 10 members of an extended family, as Palestinian militants fired back barrages of rockets.

Earlier, US President Joe Biden urged calm between Israel and Gaza on Saturday and affirmed his support for a two-state solution in his first phone call with Palestinian President Mahmoud Abbas since taking office, the official Palestinian news agency said.

Biden dispatched an envoy to the region on Friday to work for calm. Biden told Abbas the United States “is making efforts with the concerned parties to reach the goal” of reducing violence in the region, a summary of the call published by WAFA said.

Biden also said the United States opposes the eviction of Palestinians from East Jerusalem’s Sheikh Jarrah, the summary said, a case that helped ignite tension in the holy city and spark fighting between Israel and Gaza.