22 Palestinians were wounded following the clashes, Police said they had made 11 arrests. 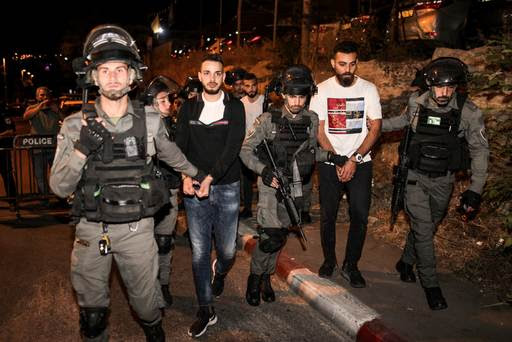 The United Nations urged Israel on Friday to call off any forced evictions in Israeli-annexed east Jerusalem, warning that its actions could amount to “war crimes”.

His comment came after 15 Palestinians were arrested in Israeli-annexed east Jerusalem overnight in clashes with police over an eviction threat against four Palestinian families.

The second straight night of rioting in the Sheikh Jarrah neighbourhood was fueled by a years-long land dispute between Palestinian refugees and Jewish settlers in the strategic district near Jerusalem’s Old City.

Tensions have been fueled by a long-running legal case over the homes of four Palestinian families on land claimed by Jews, which is due to go before the Supreme Court on Monday.

“We wish to emphasise that East Jerusalem remains part of the occupied Palestinian territory, in which international humanitarian law applies,” Colville said.

“The occupying power cannot confiscate private property in occupied territory,” he said, adding that transferring civilian populations into occupied territory was illegal under international law and “may amount to war crimes.”

Colville demanded that Israel halt actions that “further contribute to a coercive environment or leads to a risk of forcible transfer.”

“We further call on Israel to respect freedom of expression on assembly, including with those who are protesting against the evictions, and to exercise maximum restraint in the use of force,” he said.

The latest clashes followed violence on Wednesday night, when 22 Palestinians were wounded, according to the Red Crescent. Police said they had made 11 arrests.

Earlier this year, a Jerusalem district court ruled the homes legally belonged to the Jewish families, citing purchases made when the whole of historic Palestine, including what is now Israel, was under British rule.

The Jewish plaintiffs claimed their families lost the land during the war that accompanied Israel’s creation in 1948, a conflict that also saw hundreds of thousands of Palestinians displaced from their homes.

Israeli law allows Jews who can prove pre-1948 title to recover their properties but do not afford the same right to Palestinians.

Colville stressed that “Israel cannot impose its own set of laws in occupied territory, including East Jerusalem.”

Israel seized east Jerusalem in 1967 and later annexed it, in a move not recognised by most of the international community.

The district court ruling infuriated Palestinians in Sheikh Jarrah, who viewed it as a further step in what they see as a Jewish settler effort to drive Arabs out of east Jerusalem.

Israel’s Supreme Court had called on the sides to seek a compromise, but when that failed it announced it would hold a new hearing on Monday, during which it is expected to rule on whether the Palestinians can appeal the district court decision.

An appeal process could take years.