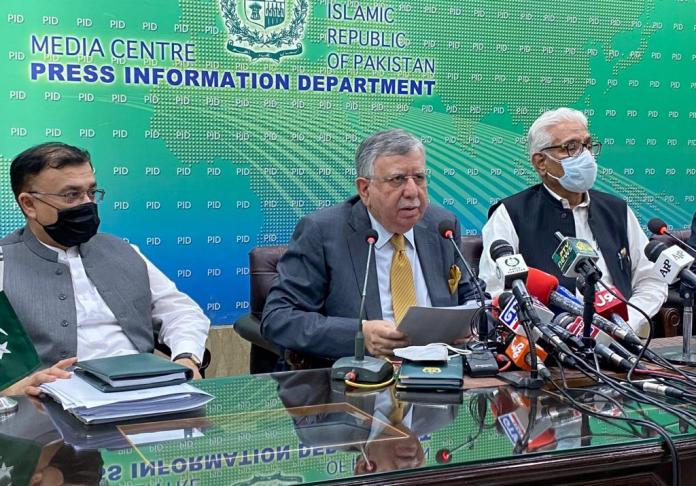 ISLAMABAD: Calling revenue generation, power reforms, price stability and overall economic growth as four big challenges, Federal Minister for Finance and Revenue Shaukat Tarin has said that the government had devised a comprehensive strategy to come out from a stability phase to sustainable growth path.

Addressing a press conference in Islamabad, he said that the government had formulated around 12 sub-groups in designated areas to firm-up proposals and present short, medium and long-term plans with respective timelines for an effective way forward to lead the country towards sustainable growth.

He said that inflation had been a serious concern for the government, saying that there was a huge gap between the price the farmers are selling the products and in the retail market, which needed to be bridged. He said that the key focus was to bring price stability. Likewise, he said the government wanted to expand the social protection network by including other sectors like health, employment and skill development in it.

Tarin said that fiscal stability was another area where the government was focusing on. Despite devolution of various ministries and departments, he said that the expenditures could not be curtailed. Hence focus would be on it to cut expenditures and bring about fiscal stability. He said that the Federal Board of Revenue (FBR) had done a pretty good job, but admitted that there was an element of harassment, which he said would be eliminated.

He said that the manufacturing industry was not competitive and so was the case with export-oriented industry, hence it needed consolidation for which a sub-group has been formulated. He said that unlike other countries, there was no Foreign Direct Investment involved in the export industry, which needed to be considered.

He underlined the importance of utilizing the China-Pakistan Economic Corridor (CPEC) for promoting exports from the country. He said that China had made huge investments, now it was time that Special Economic Zones were established here so that industries manufacture products for the export purpose. He said that IT was also a promising and game-changing sector, exports of which could be mounted from current $2 billion to $8 billion in the next eight years.

He said that the government was also focused on bringing about reforms in state owned entities (SOEs), which he said would be supervised by the private sector to enhance their efficiency. The minister highlighted the importance of the financial sector, saying that this also needed to be improved, citing an example that the banking footprint was just 33% of GDP in Pakistan, which he said was much lower while in China it was around 225 percent of GDP.

LOANS TO BE SCALED UP

The minister said that loans through Kamyab Jawan would be scaled up and the government would also launch the Kamyab Kissan programme. He said that these programmes would help bring prosperity at grassroots level. He said that the government had to face challenges when it assumed power back in 2018 and had to tackle around $20 billion current account deficit in addition to debt payments.

He said that the weak financial position forced the government to go to the International Monetary Fund and accept much more difficult conditions than in 2008. He said that the economy was going well on the growth path when the Covid-19 hit the country in 2019 and affected the economy. However, the government managed it well and even gave a relief package of Rs1.2 trillion. Consequently, the economic indicators were showing positive results as remittances, industry, revenues were growing, however the third wave of Covid-19 came with another threat which had affected this growth.