Pakistan facing oxygen crisis, but no need to panic: Fawad 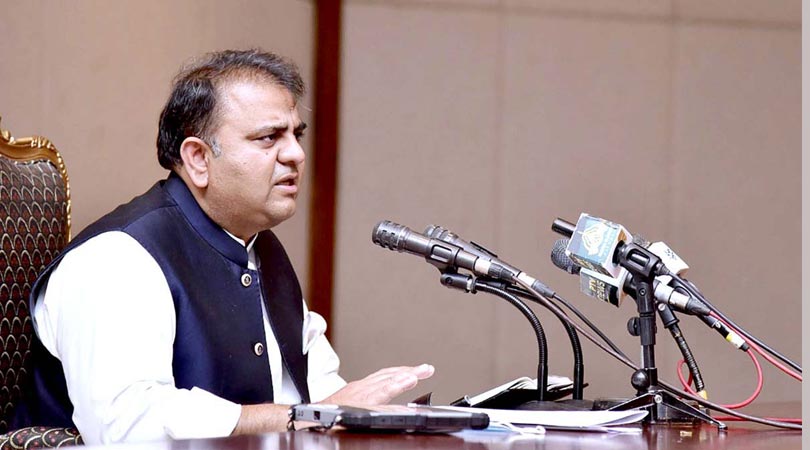 Addressing a press conference here after the cabinet meeting, Chaudhry said it is bit difficult to bring oxygen into the country from other states as it is not possible to transport it into the country via air. “Oxygen has to be transported via land,” he said, adding that while Pakistan is facing a crisis, but there is no need to panic right now.

The minister also spoke about the coronavirus vaccination process, adding that two million Pakistanis have received the coronavirus jab till now. “More than one billion people across the world have gotten vaccinated,” he said, urging Pakistanis not to be hesitant regarding the vaccine’s side effects. However, the minister said vaccine is a short-term solution to the problem and its results will take time to have an impact. “[While vaccinations are necessary and the process is underway] the government is currently more concerned with how to reduce the number of infections on a week-to-week basis,” he said.

The minister said Prime Minister Imran Khan has directed to ensure supply of essential items during the pandemic. The government is trying hard to avoid complete lockdown and that is why it is considering to announce five-day holidays for Eidul Fitr. He said the prime minister while chairing the meeting of National Coordination Committee observed that in case a complete lockdown is imposed, the government will have to ensure supply of the essential commodities. The five-day Eid holidays will ease burden on the cities as the pandemic is an urban phenomenon, he added.

The minister urged the opposition to submit their suggestions for electoral reforms to hold the next general elections through electronic voting system and granting the right of vote to nine million overseas Pakistanis. He said Prime Minister’s Advisor on Parliamentary Affairs Dr Babar Awan briefed the cabinet about the electoral reforms and electronic voting machines. The government, he said, wants to move forward on the electoral reforms with political consensus and the prime minister had written a letter to the National Assembly speaker to engage the opposition on the matter. The speaker, he said, had also written letters to the opposition leaders for their input on the electoral voting system but so far no reply had been given by them.

Fawad said the government could not wait for the opposition’s response indefinitely as it wanted to hold next general elections through the electronic voting machines (EVMs) and grant overseas Pakistanis the right to franchise.

Both the Pakistan Muslim League-Nawaz (PML-N) and Pakistan People’s Party (PPP), he said, wanted to oppose the move of granting the right of vote to the expatriates as they were not their supporters. The two parties should openly express their viewpoint whether they wanted to give the vote right to the overseas Pakistanis or not, he added.

Winding up the media briefing, Fawad said a delegation of PTI lawmakers called on Prime Minister Imran Khan to convey their recommendations over the Jahangir Khan Tareen issue. The meeting discussed all the issues in detail. Jehangir Tareen was a very important leader of the PTI and the top leadership believed in rule of law and fair play, he added.

The government, he said, would not influence any department at any cost to give someone any kind of relaxation in inquiries.

However, the PM had given a task to Senator Ali Zafar to look into the reservations of some of the MNAs, who complained that a deliberate or politically motivated attempt was being made to malign Jehangir Tareen, he added. Accordingly, he said, Senator Ali Zafar would compile a report after taking into consideration all aspects and submit it to the party’s top leadership.

Replying to media persons’ questions, Fawad said the prime minister did not accept the PTI MNAs’ demand for establishment of a commission under a retired judge with regards to the Federal Investigation Agency’s probe into sugar scam. The demand was not accepted for the time being, as it would show as to someone had been made to sit on the investigations, he added.

To a question, he said the PTI legislators would not create any issue, as they did not belong to the PPP or PML-N. “They will remain part of the PTI and if they believe it is a politically motivated case and there are political reasons behind these allegations, then there should be investigation into it and one has to move forward keeping both these in view,” he maintained. “So far there had been no meeting between the prime minister and Tareen,” he added.

Regarding the newly-appointed Minister for Science and Technology Senator Shibli Faraz’s concerns about the locally made ventilators’ quality, Fawad said he might not have been given complete presentations so far on the subject and that was why he had given such a statement. Some 100 locally made ventilators were being sent to Sri Lanka and another 300 to Iraq, while many installed at Mayo Hospital after fulfilling all the procedural requirements and tests during the year, he added.

With regards to the approval of issuance of arms licenses, Fawad said only Shahbaz Gill had applied for it and others, who wanted to get, should give applications. A new policy, he said, was being brought, under which instead of the Federal Cabinet, the Ministry of Interior would give permission for an arms licence and it would become easy.