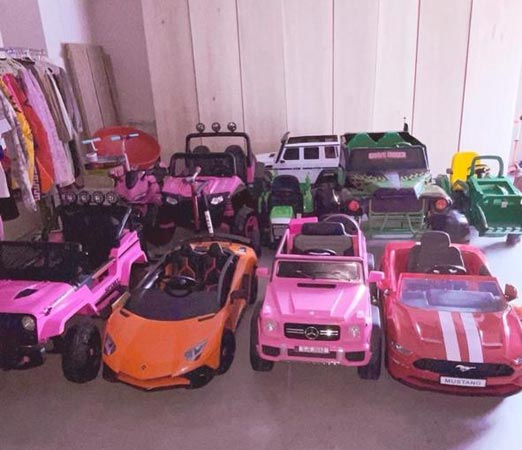 Hot wheels! It’s no secret Kim Kardashian has great taste. From wearing designs straight off the runway to launching her own clothing collection and building a beauty empire, she’s ahead of the curve in the fashion department. And it appears her four kids-North, 7, Saint, 5, Chicago, 3, and Psalm, 23 months-also have an eye for style.

On Saturday, April 24, the Keeping Up with the Kardashians star took to Instagram to share her little ones’ impressive and massive toy car collection.

“Garage,” the proud mom simply captioned her post, alongside an image that captured two rows of luxury models.

“OMFG my childhood dream,” one fan replied, with another writing, “when north has a better car collection then half adults.”

Someone else quipped, “Oh you rich rich.” Of course, the 40-year-old beauty mogul is well off.

After all, it was announced earlier this month that she’s officially a billionaire. On Tuesday, April 6, Forbes’ included the reality TV personality on its prestigious World’s Billionaires List for 2021.

According to the magazine’s calculations, Kim is worth $1 billion and it’s all thanks to her many ventures and projects, including her eponymous beauty brands, her SKIMS line, Keeping Up with the Kardashians credits and many other profits and investments.

Along with her new billionaire status, it appears the fashion founder is living her best life. A source close to the star previously told E! News, “Kim is having a lot of fun right now. She feels free and is a lot happier.”

As the insider put things, “It’s a new era for Kim.”