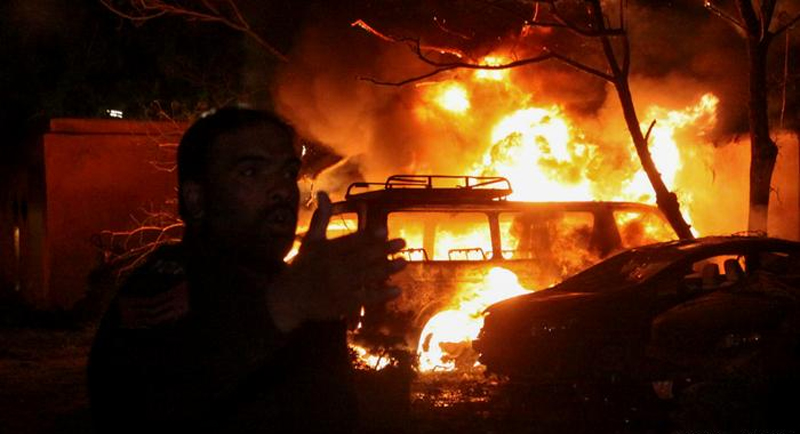 Four people died and 12 others were injured in a blast that took place in the parking lot of a luxury hotel on the city’s Zarghun Road late on Wednesday.

Of the four who were killed in the attack, one is the hotel’s security guard while another is a police officer. Two assistant commissioners are said to be among the injured. Among the total injured persons, two are said to be in a critical state while the rest are reportedly stable, a private TV channel reported.

Initial investigation revealed the explosion was caused when explosive material, fitted inside a car was detonated, said police.

Balochistan Inspector General of Police Tahir Rai said the explosion occurred in the parking lot of the Serena Hotel. He added that the hotel premises had been cordoned off and the Counter-Terrorism Department (CTD) deployed to investigate the incident.

Footage shared from the scene showed huge flames and plumes of smoke rising into the sky. A fire brigade immediately arrived at the parking area to douse the flames. Firefighters were able to extinguish the fire. The Provincial Disaster Management Authority (PDMA) officers arrived at the site to carry out relief activities. The blast, owing to its intensity, could be heard several kilometers away as well.

The injured were shifted to the Civil Hospital. Law enforcement personnel cordoned off the area and an investigation was underway to determine the intensity of the blast.

IG Balochistan Tahir Rai spoke to the media to say that police were still gauging the intensity of the blast and how many kilograms of explosive material were used in the blast. In response to a question, he said no ambassador or members of a foreign delegation were staying at the hotel when the blast occurred.

Rai said the experts in the police force were conducting their investigation, adding that they would soon make public the findings of the probe. He said the blast had damaged five to six vehicles in the parking area.

Balochistan government spokesperson Liaquat Shahwani condemned the incident, describing it as a ‘terrorist attack’ committed by those who did not wish to see Balochistan prosper. He said an investigation was being carried out and the perpetrators of the blast will not be able to escape the law. When asked whether the blast resulted due to a security lapse on part of the government, he said the primary responsibility of security rested with the hotel.

Shahwani said the hotel had its own scanners through which guests are inspected thoroughly and that vehicles entering and exiting the parking lot also had to pass through barricades, before they were checked for any explosive item. He said the investigation into the bomb blast will also take note of the loopholes that resulted in the bomb blast.

When asked whether there were any foreign delegations present inside the hotel when the blast occurred, Shahwani said there was only one ‘luxurious hotel’ in Quetta where envoys and diplomats come to have hi-tea.

In a tweet, Balochistan Chief Minister Jam Kamal Khan said he strongly condemns the explosion. “[The] situation is under control, people are requested to avoid rumours and don’t create panic,” he tweeted.

Following the blast, Federal Minister for Information and Broadcasting Fawad Chaudhry said that condemned the blast and said that the federal government is in close touch with the Balochistan government and a preliminary investigation related to the blast is underway. “The government will issue a statement as soon as the nature of the blast and the damage are determined,” he wrote on Twitter.