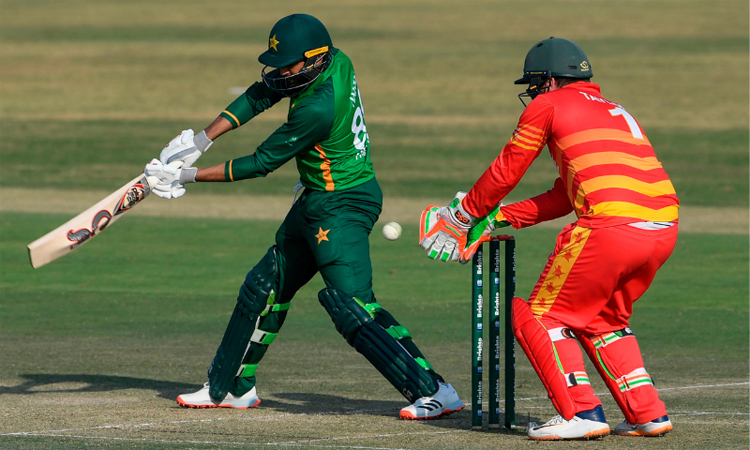 HARARE: Pakistan’s southern Africa adventure has moved to Zimbabwe, where they will play three T20Is and two Tests, seemingly under less pressure than they were across the border. Zimbabwe have not qualified for the T20 World Cup, neither are they part of the World Test Championship. They are, as Pakistan’s head coach Misbah-ul-Haq put it, a side that has “nothing to lose”, which transfers the pressure onto the so-called stronger opposition, who are expected to win. Certainly, in T20Is, that has been the case. Pakistan have a 100% record against Zimbabwe with victories in all 14 matches they’ve played against each other. The most recent was in a series in November last year where Pakistan were dominant in chasing targets in all three matches.

They’ve become even better at that, achieving their highest and second-highest successful targets in the recently concluded series in South Africa. So Zimbabwe will need to have a plan to stop a prolific top order and their captain Sean Williams is confident they can, with a crop of youngsters that he called “generation next” of Zimbabwe cricket. Zimbabwe have three uncapped players in their squad –– batter Tadiwanashe Marumani, fast bowler Tanaka Chivanga and spinner Tapiwa Mufudza . The Zimbabwe players have also recently played in a domestic T20 competition, ensuring format-specific game time going into this series. In fact, Marumani and Mufudza were among the top performers in the tournament.

But there is a much bigger cause for Zimbabwe than that of a smaller nation making a statement against a bigger one or any attempt to rebuild. Their cricket community is still reeling from news of their former captain and coach Heath Streak being handed an eight-year ban for breaching the ICC’s anti-corruption code and will want to change the narrative around the game in their country. That means they have everything to play for and Pakistan will be wary of an outfit that could see its very reputation as being at stake.

Craig Ervine and Brendan Taylor missed out on Zimbabwe’s trip to the UAE to play Afghanistan for health-related reasons but are back and in form for this series. The pair enjoyed successful runs in the recently completed domestic T20 competition finishing as the highest and third-highest run-scorer respectively, both with strike rates above 165. Where Zimbabwe lacked in big-hitting in the UAE, they’ll hope that can be made up here, not to mention the experience both players bring. Williams called their inclusion “massive for the team”.

Because of the success of their top three, Pakistan’s middle order was largely untested in South Africa and Misbah identified it as the area he would like to see improvement on this trip. The focus will be on Pakistan’s most experienced batter Mohammad Hafeez and least experienced Haider Ali. Neither had a particularly profitable tour of South Africa – Hafeez scored 55 runs in three innings and Haidar 29. Hafeez has the recent form to call on, though. He had a solid run against New Zealand last December but Haidar has to go further back. His last notable T20I knock was an undefeated 66 against Zimbabwe, so perhaps the familiar opposition will spur him on.

Taylor will return to the top of the order with Ervine slotting in the top four. After being dropped from the final match against Afghanistan, Wesley Madhevere could have the opportunity to play his first T20I at home. It would be amiss not to include a specialist spinner. The choices are Wellington Masakadza and offspinner Mufudza, who could earn his first international cap. There’s no good reason for Pakistan to deviate from the XI that beat South Africa in Centurion apart from trying to create a spot for Usman Qadir, especially given Zimbabwe’s struggle against Rashid Khan. To do that, Pakistan may have to go in with a seamer or a batter short which could see Haris Rauf or Asif Ali miss out.