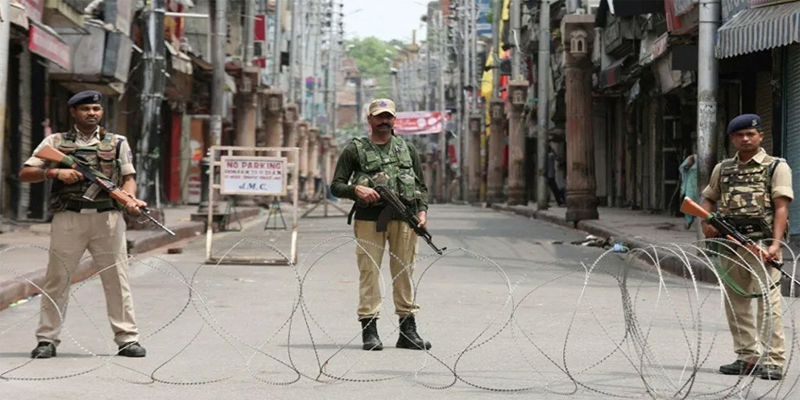 Indian troops in their fresh acts of state terrorism martyred four more Kashmiri youth in Pulwama and Shopian districts of Indian Illegally Occupied Jammu and Kashmir (IIOJK) on Friday, bringing the toll of the martyred youth to 7 in two days.

According to details, two youth were martyred by the troops during a cordon and search operation at Naibugh area of Pulwama, while two more youth were killed in a similar operation in Jan Mohalla area of Shopian.

Earlier on Thursday last, the troops martyred three youth in the Jan Mohalla area where the operation was stopped Thursday night and resumed early Friday.

Media reports said that Indian troops are firing heavily towards a mosque in Shopian town. The violent military operations at both the places continued on Friday.

Hurriyat leaders and organisations have strongly denounced the killing of youth by Indian troops in Pulwama and Shopian districts.

Democratic Political Movement (DPM) Chairman Khawaja Firdous in a statement said the forces’ personnel have been given unbridled powers under Armed Forces Special Powers Act (AFSPA) to kill people, especially youth, to spread terror among the population to keep them away from the ongoing freedom struggle.

Information Secretary of Jammu and Kashmir Mass Movement, Shabbir Ahmad in his statement condemned the fresh killing spree in IIOJK by the Indian troops. He also urged the international community not to become a mute spectator but take a strict notice of the Indian state terrorism in the occupied territory.

Chairman of Islami Tanzeem-e-Azadi Jammu and Kashmir, Abdul Samad Inqilabi deplored that Indian troops are killing innocent Kashmiri youth on a daily basis. He said that killing and other Indian brutalities would not stop the people of Kashmir from carrying forward their just struggle for securing their right to self-determination.

In a statement, Ali Amin Khan Gandapur urged the international community to prosecute Indian civil and military personnel for their worst form of state terrorism and serious crimes against humanity in the Illegally Occupied Jammu and Kashmir.

He said that India has intensified its state terrorism in the illegally occupied Jammu and Kashmir since launching a military siege on Aug,5, 2019 and revoking the the special autonomous status of the territory.