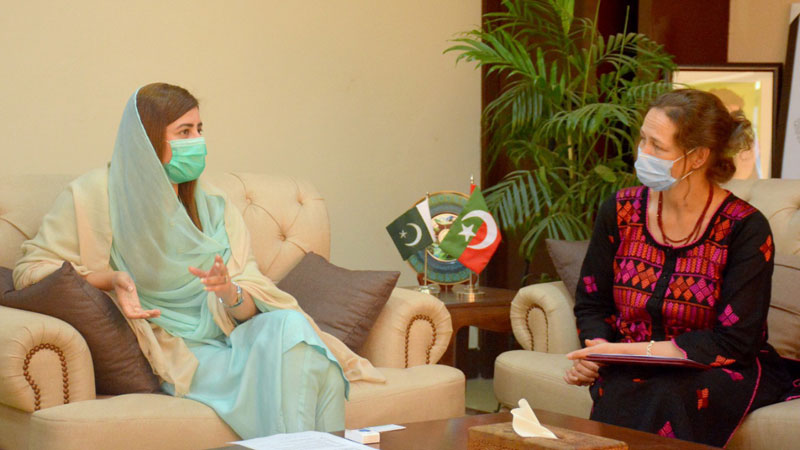 Ambassador of Denmark to Pakistan Lis Rosenholm on Thursday called on Minister of State for Climate Change Zartaj Gul Wazir and conveyed her government’s interest to join and support various green initiatives launched under the Prime Minister Imran Khan’s vision for Clean Green Pakistan, according to press statement issued here by the climate change ministry.

“However, the Danish Ambassador and the state minister Zartaj Gul resolved to deepen further Pakistan-Denmark relations through enhanced cooperation and collaboration in, among others, forestry, renewable energy, water and disaster management through jointly working towards Prime Minister’s world-acclaimed vision for clean, green and climate-resilient Pakistan,” he added.

The Danish ambassador told the state minister Zartaj Gul that Danish government, which is committed to global climate and environmental sustainability actions, is deeply appreciative of the stimulating vision of Prime Minister Imran Khan for Clean Green and environmentally-sustainable and resilient Pakistan and impressed with Clean Green Pakistan programme and various green projects initiated under the vision, specially one of the world’s largest ambitious 10 Billion Tree Tsunami Programme (TBTTP) Ecosystem Restoration Initiative for promotion of nature-based solutions, Protected Areas Initiative for conservation and protection of the environmentally-sensitive and biodversity-rich wildlife areas.

She also informed the minister that Denmark is a world leader in fighting climate change. We aim to reduce country’s carbon emission to 70% by 2030 (below its 1990 levels), with carbon neutrality targeted already by 2050.

The state minister lauded the Danish government for its interest in Pakistan’s green initiatives and furthering it through enhanced collaboration in shape of transfer the technology and technical-know as well as capacity-building of the relevant sectors for effective implementation of the Prime Minister Imran Khan’s green initiatives.

“We are very much honoured to receive the offer for signing agreement with the Danish government for boosting cooperation in the forestry, environment, ecosystem restoration, renewable energy, water conservation, vertical gardening, urban forestry and would sign the MoU after go-ahead from the Prime Minister Imran Khan,” Zartaj Gul told media after the meeting.

While sharing details of Pakistan’s green projects being implemented under the environmental leadership of PM Imran Khan, she told the Danish ambassador that the climate change ministry was implementing several globally-acclaimed flagship programmes and projects in technical support with the international UN organisations including United Nations Development Programme and UN Food and Agriculture organisation and the World Bank.

The minister also apprised the ambassador that another ambitious Protected Areas Initiative (PAI) launched last year under the over-arching programme ‘Green Pakistan’ aims at the conservation and promotion of nature-based solutions and creation of additional 5,000 green jobs for community members in the protected areas.

“The ambitious PAI primarily was being implemented at a full-throttled pace to boost the country’s protected areas cover from 13 per cent to 15 per cent by 2023 and create 5,000 green jobs across the country,” Malik Amin Aslam elaborated.

She also informed the ambassador that the climate change ministry has also launched a unique post-Covid-19 green economic recovery initiative dubbed as Green Stimulus Initiative for creation of green employment opportunities for those rendered jobless after the COVID-19 pandemic since March 2020. Under the initiative, so far around 87,000 jobs have been generated all over the country in green sectors for unemployed daily-wagers, which is being replicated in other countries in line with Pakistani model.

The Danish Ambassador Lis Rosenholm emphasised during the meeting that her government considers youth and children as key stakeholders when it comes to their role for health of our Planet. And its is equally heartening to note that Pakistan also assigns greater importance to the youth participation in green initiatives and climate action, she added.

“Pakistan and Denmark share ambitions on greening the Planet. We see eye-to-eye on the challenge of climate change. I am always delighted to discuss solutions, exchange knowledge and explore collaboration between our countries. Partnership is the only way to tackle climate changes,” she highlighted.

The ambassador and the state minister agreed and said, “We all have an important role to play – and to get the world on a zero-carbon path we need to learn from and inspire one another.”