Reminiscences of My Wanderings is a lucid narration of diplomatic intricacies 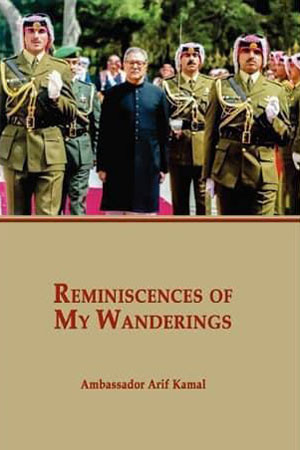 Ambassador (r) Arif Kamal, in his Reminiscences of My Wanderings walks the reader through his memory lane to share his varied experiences, spanning over seven decades.

“The Chronicle of (his) wanderings”, which he describes as “one more addition to oral history”, marries his personal and official perspectives beautifully.

A scion of a noble Kashmiri family, who had to leave his birth-place at the age of nine months, was never able to forget the pangs of displacement and ‘homelessness’. This is evident from the jubilant narration of his visits to the Indian Occupied Kashmir after retirement, which he describes as “a renewal of links to my roots”. This also explains his views on questions of identity and liberation; and his passionate support for the freedom-fighters in Kashmir and Palestine.

His invaluable contributions as Chair, Global Studies at the National Defense University’s Institute of Strategic Studies, Research & Analysis (ISSRA) from 2007-2017 and as a participant in Track II diplomacy on Kashmir thereafter provide an eloquent testimony to his quest for peace with justice.

His ‘story’, inter alia, provides an insight into the state of affairs in West Asia. His posting to four Arab states and experience as Desk Officer enabled him closely monitor both sides of the Persian Gulf. He developed a deep understanding of not only the undercurrents in the GCC/ME politics but also the most burning issues of our times, namely, Democracy, Human Rights, Rule of Law and Terrorism. Hence his insightful treatment of developments in the region.

Ambassador Kamal highlights the Iranian reality which gives it an edge over its adversaries across the Gulf: a complete entity, geographically, having diverse topography – mountains, plains, deserts, sea and natural resources; 5,000 years old civilisation; continuity from the Shah to the Ayatollah and, of course, the lesser imprint of the colonial rule and correspondingly lesser dependence on hired defenders.

Based on his interaction with our sizable community in the Gulf, he acquired first-hand knowledge about the lot of expatriates in the oil-rich monarchies and has shared it with his readers.

He dilates on the deadlock on Palestine, despite notions of ‘land for peace’ and wonders as to how could ‘liberation struggle’ and ‘statehood’ go hand in hand!

Recalling his stint in Moscow, he re-visits the former Soviet Union’s 1979 intervention in Afghanistan. He very convincingly explores whether the Soviet move was to reach warm waters or to save their constituency in Afghanistan. He is fascinated “with the imbalance between ‘perestroika’ and ‘glasnost’ that, he believes, precipitated the collapse of the Soviet Union.”

Ambassador Kamal boldly acknowledges the challenges in diplomatic profession. He doesn’t hesitate in admitting that it was not easy to defend and project successive governments of Pakistan; nor to please the Pakistani community. He feels, and rightly so, that Diplomatic Missions Abroad are, essentially, like show rooms, which market the products manufactured back home. And there is always a limit to salesmanship to market sub-standard products.

Ambassador Kamal’s “Reminiscences ” is an enjoyable read for professionals and non-professionals alike. It is recommended for students and practitioners of diplomacy, academia focusing on IR and history, even casual readers. His lucid narration of diplomatic intricacies in anecdotal manner makes it easy even for a casual reader to grasp the message effortlessly. The book is expected to have a long shelf life.