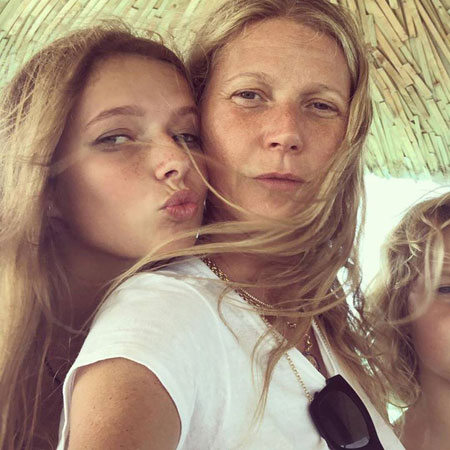 Apple Martin couldn’t help but poke fun at her famous mom’s morning routine. The 16-year-old daughter of Gwyneth Paltrow and Chris Martin brought the laughs over the weekend while taking part in the launch of Goop’s TikTok account. In one of the company’s debut videos, Apple completely roasted her mom by narrating the Iron Man star’s daily regimen.

“So first, my mom drinks her Goop Glow Superpowder and she eats nothing but dates and almond butter,” Apple began. “I suppose the Goop Glow is a part of her cleanse, which she’s been on since-the day I was born, apparently.”

Continuing to narrate the Oscar winner’s routine, Apple said, “She just prances around the bathroom, putting on her millions of Goop Glow products for her glowing skin.” And the teenager even poked fun at her mom’s infamous products.

“Then she gets to work, making some more eggs,” Apple laughed. “And candles.”

Goop captioned the video, “When you get roasted by your gen z daughter” However, despite Apple’s hilarious commentary, it seems as though she’s actually a fan of Goop’s skincare line.

In a separate video for Goop, Apple shared her own morning routine, including the company’s new Goop Glow products.