Pak-Iran naval drill in the offing 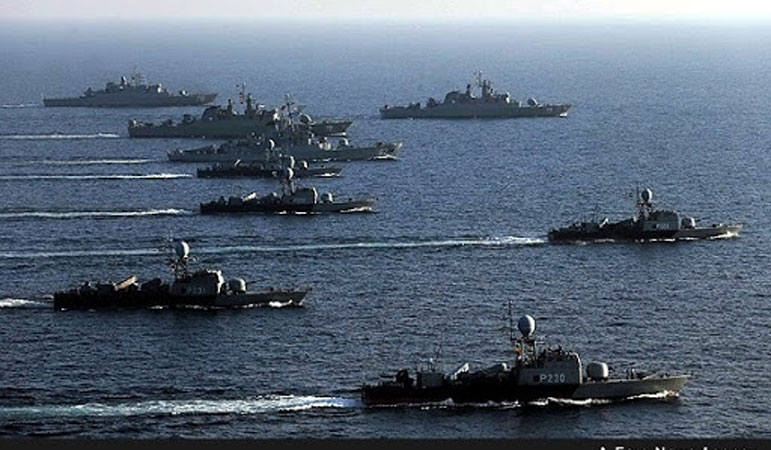 The combined naval exercise will be held in the very near future with the participation of navies of Pakistan and Iran.

The Iran-Pakistan combined naval exercise will be held in the coming days in Bandar Abbas and Lark Island of Iran with the aim of exchanging educational and intelligence experiences, securing the region’s maritime trade lines, good neighbourliness and deepening relations between the two countries.

It should be noted that Pakistan’s intelligence-combat and operational flotilla docked in Bandar Abbas on Saturday with the official welcome in 1st Naval Zone of Army of the Islamic Republic of Iran. A Pakistani fleet consisting of two naval vessels docked at Bandar Abbas to further strengthen bilateral and friendly relations with Iran.

With the message of solidarity, peace and prosperity for the Iranian people and the region, Pakistan Navy Flotilla will be present at Bandar Abbas till April 6. The Pakistani fleet enters Bandar Abbas every April, which did not happen last year due to the coronavirus pandemic, said Chief of Staff of the Islamic Republic of Iran Navy.

On the last day of its presence in Bandar Abbas, the fleet will be escorted to the east of Lark Island by the Navy of the Islamic Republic of Iran.

Meanwhile, Commander of the Iranian Navy’s First Zone Admiral Jafar Tazakkor has said the navies of Iran and Pakistan are cooperating in line with the plans to boost maritime peace and security. He termed the level of relations between the navies as “promising”, saying that the neighbouring navies “are cooperating to establish peace and maritime security.”

“This cooperation has existed in the past and will continue in the future,” The Iranian commander said. Admiral Tazakkor added, “This visit of the Pakistan Navy is in line with the agreements between the two countries, and at the end of the visit, a joint exercise will be held.”

“Such trips and increasing bilateral interactions have a positive effect on securing shipping lines and maritime trade.” The commander of the First Naval Zone of the Iranian Army also said, “A meeting with the military officials of Hormozgan is also planned for this fleet and its members will visit the city of Bandar Abbas in compliance with the health protocols.”